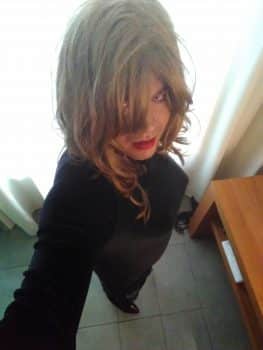 Actually, before starting he.r training, this sissy was already a camwhore for several men, so s.he knew he.r pussy easily stretched. But s.he took no pleasure.
Despite the sissy followed the mindset of the assignment, s.he did not exactly followed it step by step.
Getting easy with that was quick, the main issue was pleasure. As s.he grows nails, this was pretty painful. So s.he started using buttplugs very regularly.
Two months later, this sissy had her first orgasm out of a buttplug play. This orgasm was mind blowing for he.r. More pleasure than s.he ever had with he.r clitty. Wow !

Therefore, s.he quickly moved to the next step, being men’s fucktoy.

s.he took advantage of he.r holidays in solo to meet two men in a row. It proved good, stressful but good. The most surprising is that… s.he took very big cocks without a stress. s.he instantly loved it. No need for real foreplay, just lube plus a buttplug.
By the way, this sissy would like to mention that now that s.he wears thong on a daily basis, he.r buttplug never slips out outside again !

Since December, this slut has grown more and more comfortable with men fucking he.r. Today, s.he has celebrated he.r tenth cock in the ass in a time span of 6 months. He fucked he.r in doggy, missionary (while passionately kissing he.r), and equestrian, on his request.
And s.he loved it, she cummed as he was fucking he.r, his tongue in he.r mouth, he.r legs on his shoulders. And s.he is looking to be penetrated again by many men in the future. s.he also keeps going with Blacky, he.r Titanmaster buttplug.

In the meantime, this sissy has also lost he.r Significant Other (She dumped he.r for a real man), so he.r only allegiance is to the House.

Therefore, this sissy deeply needs the help of the House to define he.r new steps. More sex with men? Finding a Master or a Mistress? Something completely different? this sissy needs to know.

Curtsey to Superiors and thank You for reading!