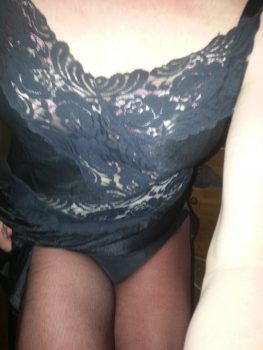 If this sissy thought that one year ago that s.he would be writing this or even thinking these thoughts that a sissy should think. S.he would have thought that it was not possible.But here s.he sits dressed as a woman feeling feminine, teetering on the edge of ecstasy. Its a storybook tale of a (wo)man who looks in the mirror and sees a woman. s.he can and will behave he.rself. You see this sissy adores women. What s.he is is in mimic performing a homage, a tribute to the softer side of humanity. This sissy was blessed by having five older sisters who took care of he.r . They also gave me an intimate look at femininity. s.he has become the sixth sister ,the youngest .Not only does s.he emulate he.r sisters but also friends and aquaintences. But s.he is alone or so s.he assumed. However s.he could be wrong,.The deeper s.he looks in this smashing site that is Sissify, s.he knows that this can not be farther from the truth.Girls,you are my peers. This sissy sees you in all your splendour, s.he can feel the community and can finaly feel he.rself at home. s.he loves to serve that is how s.he was brought up thats really nothing new. Her wish is to please.

This sissy has a growing collection of fashionable womens clothes.s.he is especially proud of the undergarments that is he.r foundation. Whenever s.he can s.he will slip into my delicates and it is an incredible feeling of joy. Since s.he has chosen to become complete and acknowledge her feminine spirit, she has no need for any form of aggression.As if it never existed. If s.he knew back then what s.he knows now. This is no longer an option to her now .It is he.r passion. When not wearing panties s.he chooses to wear an unisex brief that has enough compression to keep he.r tucked and tidy. Smooth, yes 24/7! Two of my sisters have passed and this sissy has come to realize that we must enjoy the time that we have.To be yourself and to embrace oportunities. Sissfy has accepted t.his sissy. She is grateful for he.r opportunity to serve and to follow a training here.This sissy believes that having enough panties to wear does not mean they dont have to be handwashed after a long day. It does not take long and has a relaxing effect on he.r .s.he enjoys cooking and entertaining and does know the virtue of cleanliness.When nurturing he.r plants s.he tells them of he.r dreams while fantisizing that s.he is the “belle of the ball”. This sissy practices her grace in walking, sitting and kneeling as a woman on a dailly basis. It is shameful that this sissy feels alone in her servitude. The zen of the matter. No goddess to serve. Here she is this sissy, s.he has found herself and she is feeling vulnerable and humble. And another truth yes, this sissy’s bottom is warm. I have so much to learn and present myself for further training.
Curtsy, elvi