sissy had have her legs examined for varicose veins. (sissy had a bad episode earlier which Wife helped sissy through)

sissy checked in, alone, Wife had left her there. the check in Nurse was a nice Woman who happened to have very pretty fingernails. sissy complimented her and struck up a short conversation, where She beamed with happiness for sissy’s praise. She gave sissy about 8 pages to complete. it took considerable time.

sissy was examined by a Nurse initially. sissy was left alone to undress. sissy had panties on and was tucked and plugged. sissy had forgotten a bag so sissy rolled sissy’s panties and wrapped them around sissy’s plug and wrapped both in sissy’s coat. Nurse gave sissy a typical hospital gown and had sissy strip and put it on. so right away sissy’s toes were revealed. Nurse said nothing but did look at them a bit more than a glance. sissy had to lay on a flat table and Nurse told sissy She was running ultrasound tests on both legs groin on down. sissy had to bend her right leg out toward Nurse. She put the usual ”goo” on the inside of sissy’s leg and proceeded to go up and down sissy’s legs for about 15 minutes. Nurse had to push up toward sissy’s sissy pubis so sissy knew Nurse could see sissy was totally shaved.

during this sissy noticed this Nurse also had had very pretty decorated nails, with a base She called periwinkle. sissy complimented Her on what a great job She was doing and then asked about Her pretty nails? She started and talked to sissy about them as She worked. sissy told Nurse she was a nails freak herself. next, Nurse said (wow) She had noticed sissy’s toes were polished and now She understood – sissy was a nails freak too. sissy was awed, a total stranger, with Her hands all over sissy’s right leg (did the other one after this one was finished). so sissy told Her how sissy kept Her toes polished all the time, but in no way could they compete with Her beautiful nails.

to save hearing it all over again, Nurse did the other leg the same way. during all this time sissy and Nurse talked back and forth like two Girls, all about their nails, where Nurse had Hers done. etc. sissy really got into it and enjoyed it. before leaving Nurse took some wet cloth and wiped up and down sissy’s legs to get the ”goo” off (just touching the edge of sissy’s sissy mound) and then wipe dry. as She did this sissy looked at her hands and nails and dreamed about having permission to place herself between Nurses sweet thighs and perform cunnilingus like She’d never had before. slut was not thinking fully properly about submission so slut started chanting “love Wife” in her mind.

Nurse finished and took sissy to another office, still in the gown (which showed her back and tush, of course), where the Doctor would come in to talk with sissy. He came in and almost immediately looked at sissy’s toes, but said nothing. He proceeded to show sissy what needed to be done, running His hands up and down, touching next to sissy’s pubis also. during this he had to hold sissy’s foot in His hand so He was seeing sissy’s polish up close.

the result is sissy has to have a series of small operations 2 days apart and then an evaluation, takes about 3 weeks. but this is not major surgery. so sissy with do first one next Tuesday. each one takes about 45 minutes, plus the usual get ready and finish up time. Doctor went over things with sissy and gave sissy some info and sent sissy to the front (after dressing) to make a schedule.

there were three Women there, including the Nurse who did sissy’s tests. sissy got the schedule and left, wondering if Nurse had told the other two Women anything and if the Doctor would say anything.

sissy knew the next time she was there sissy would be more exposed, the Doctor having to move the drape back to do His work and sissy’s shaved mound wold be pretty well visible and unlikely, but possible sissy would be hugely embarrassed if sissy’s teeny clitty was seen by accident. sissy prefers it tucked away and not seen. sissy hopes the Nurse she met today is there, but She did tell sissy later she would not be there. darn!

so now sissy is all nervous and flustered and worried. sissy put on new nail polish tonight to help calm down.

sissy continued the visits with the Doctor. shaved and in panties. sissy now has to wear special stockings to support surgical areas. they are thigh high and look remarkably like a real one. sissy’s pics are after latest doctor visit sissy hopes they will please You. sissy felt Nurse liked sissy’s polish, but She never said a thing about sissy’s pink panties.

sissy is so thankful for curtsy, beloved Madame Stewart, curtsy helping sissy grow in being a better and better sissy. each real life experience helps sissy mover further down the path. 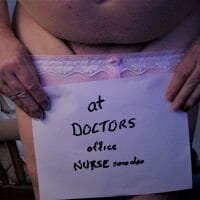 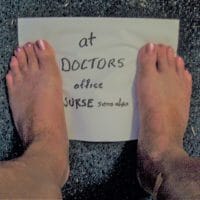 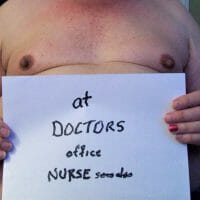