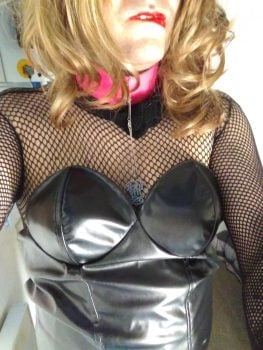 It has been a while since this sissy was active in the House. However, s.he is still following the Principles of the House with great care.

he.r first experience was deceptive, as the cock s.he sucked was really, really big, but fortunately he.r Master understood how this dumb slut was, and He did not fuck he.r head too violently.

Last week, however, this sissy felt a very urgent need to get a cock inside he.r, and to complete a sexual Assignment from the House. s.he took her sexiest sissy clothes (black dress and pink heels, and a complete fishnet), then rushed to the nearest cheapest hotel.

30 minutes later He was at the hotel, naked on a bed, being sucked in darkness by this sissy. s.he loved it. His cock was big, yet s.he could still swallow it fully. s.he spat on it, moaning, hearing His groans of pleasure as He called he.r names.

As s.he moved on to put some lipstick back, he.r Master advised he.r He would leave. He told he.r: “you have my number, call Me whenever you are available”.

As s.he was alone, s.he felt incredibly good, as never a date was such a success. he.r passing was OK, s.he gave pleasure with he.r. mouth.

In the darkness of night, s.he came back home, disguising once again as a normal man. Happiness still shone in he.r heart.