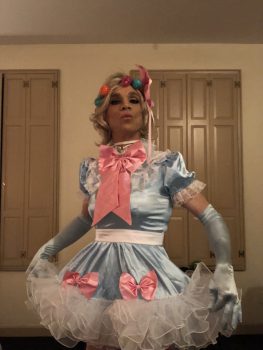 This sissy has been shaving weekly in the bathtub. The shaving is part of a ritual he.r Superior has ordered. The first order of business is that sissy is responsible for keeping the bathtub and surrounding area clean, which involves twice weekly cleaning duties. If he.r performance is satisfactory, which it has been thus far, s.he is allowed to enjoy a cleansing and shaving ritual. s.he first makes an exfoliating scrub for he.rself out of cane sugar, coconut oil, lavender essential oil and activated charcoal. Having prepared this, s.he is to fill the tub one quarter full with as hot of water as sissy can tolerate…and then a little hotter. s.he is to write down on a list ten ways in which s.he did not sustain he.r femininity the past week. s.he places four tea bags in the scalding hot water. sissy is to climb in the hot water and submerge he.rself except leaving he.r nose out to breathe. sissy is to review he.r list of forgetting he.r feminity for ten minutes submerged in the scalding hot tea bath. Once done, s.he is to fill the tub with water to he.r preference of temperature and depth and scrub he.r body with the exfoliating scrub. Sissy is to put peppermint oil in he.r shampoo, and shampoo he.r hair. Once scrubbed and shampooed she follows the protocol as set forth by House of Sissify.

S.he uses a Venus Swirl razor in purple. Sissy has been ordered to a waxing salon on a monthly basis, so twice now sissy has had wax applied to he.r naked body except for the trunk area and had he.r hair ripped off. The attendant seems to enjoy Her work, and sissy feels excitingly embarrassed by the rough treatment and the attendant’s glinting eyes as She shows sissy the hair on the cloth strips and gloats how “clean” sissy is. The waxing comes after sissy is given a manicure and pedicure. Sissy’s Superior requires toe nail polish. She has yet to require sissy to have he.r fingernails polished, though this will occur this upcoming Monday for the first time, as sissy is to get manicured and dressed and spend a day by he.rself walking about a small nearby town that is a tourist attraction.

Regarding the House protocol, sissy’s ten minute submersion to reflect on he.r faults and he.r scrub and shampoo provide the time to accomplish this. sissy’s Superior does not wish sissy to provide Her with a pedicure at this time. She has sissy doing cleaning chores rather than chores to care for Superior. sissy is careful to follow the instructions of the House and shave relatively small areas at a time, applying foamy lathered soap only to those areas. Sissy loves the details of holding the razor as s.he is instructed by the House, as it reinforces he.r servitude, and it is a feminine grip, and sissy is discovering that it is in the minute to minute movements and postures of the body that feminine expressiveness can impact he.r mind and overall sense of modeling Women.

Sissy does start at her toes and move up he.r leg as instructed. sissy is becoming slightly preoccupied by the hair on the back of he.r calf. s.he wants it gone. So far, s.he is keeping it at bay with the House techniques and he.r two waxings, but it is stubborn hair, and sissy is craving smooth smooth skin. sissy has cut he.r knees ☹. s.he is getting better and is trying to be extra careful. sissy has a few methods for he.r backside. s.he will bend at the waist and sit as far back as s.he can, like a yoga chair pose. s.he will walk over to the shower area and brace he.r leg as high on the wall as s.he can. These methods provide good exposure and access to the gluteus and anus areas and stretch the skin to allow for a smooth shave.

sissy then proceeds to the upper extremities. sissy’s dance instructors have noticed the loss of hair from sissy’s hands and arms. There have not been any words spoken, but there has been a kind of quiet, and a slight change in the demeanor of the instructors toward sissy. sissy would say that he.r instructors male and female have found a certain pleasure in being a little rougher with sissy as they lead he.r around the floor and offer instruction. It may be sissy’s imagination, but s.he thinks that this is the case. Also at the YMCA gym sissy goes to twice weekly to swim with his male friend since college, there has not been a huge notice or curiosity of the once hairy sissy now smooth skinned, but sissy did notice a fellow gym goer staring in a kind of shock at sissy’s bare genitals. sissy does not have a “eighties ‘do” anymore or even a strip or triangle. sissy’s Superior’s preference is total hair removal, so sissy is bareskinned with he.r lower abdomen and genitals and testicles. As much as sissy is frustrated over the back of he.r thighs, s.he is frustrated at he.r chest, as he.r chest hair is stubborn and grows back quickly. sissy is hoping that this improves with diligent skin care. s.he is wondering, though, if s.he will need hormones to achieve truly smooth skin.

sissy then cleans the tub for he.r Superior and finishes in the shower. sissy exfoliates again after he.r shave. Then she washes with a moisturizing body wash. Then she applies oil. s.he then inserts a buttplug and tucks and puts on a pair of panties. Tucked and pantied sissy then writes a list of how s.he can improve he.r femininity for the upcoming week. Then he.r Superior inspects he.r cleaning work and he.r skin and he.r lists, and if s.he is a good girl, s.he is allowed to wear a satin nightgown to bed. if the cleaning or shaving or list writing have not been satisfactory, which has occurred on one occasion, s.he is to rectify the problems and then go to bed in men’s pajamas.