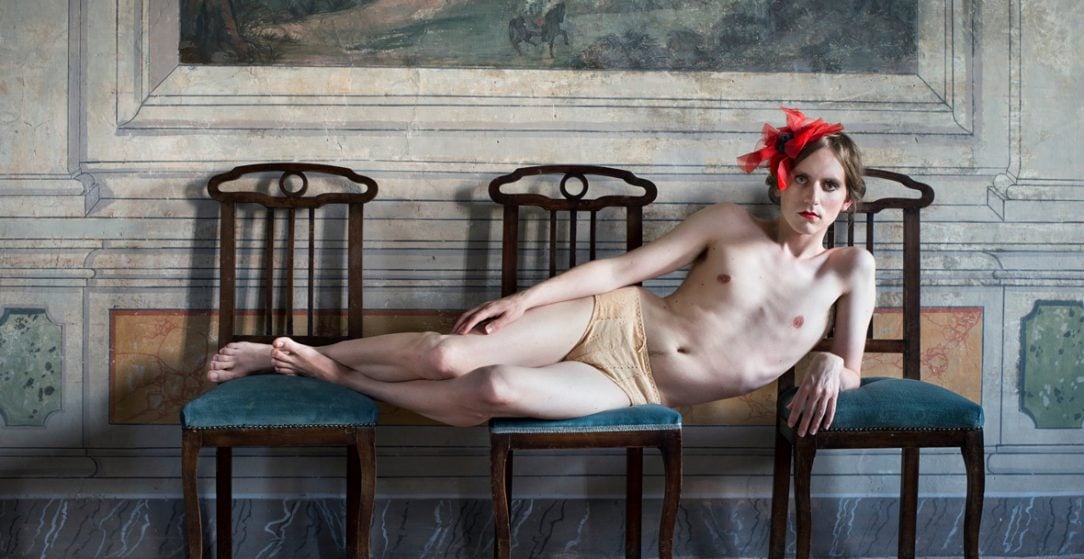 In their intimate portraits, the photographer Lissa Rivera and her partner, BJ Lillis, are building their own fantasy world.

On a long subway ride three years ago, BJ Lillis decided to share something with his friend and co-worker, Lissa Rivera. Mr. Lillis, who describes himself as genderqueer, told her that he had spent most of his college years dressing, full-time, in women’s clothing.

But in the professional world, he’d lost his confidence. To help him regain it, she offered to take his photograph.

Mr. Lillis had never really seen himself, dressed as he wished, in a carefully made portrait.

“So much of identity is constructed from looking at pictures,” Ms. Rivera said in a recent interview. “Looking at photographs and looking at a film can really change who you are.”

The two have made dozens of images since, in a project called “Beautiful Boy.” An exhibition of the same name opens June 1 at the ClampArt gallery in Chelsea.

The first test images were shot in 2014 in Ms. Rivera’s apartment. She posed on her own, swathed in fabric from a neighborhood store, before posing Mr. Lillis.

“When we took the first photo,” Mr. Lillis said, “I felt like I’d never had my photo taken before.”

That impromptu portrait session stirred something between the two of them. Over the following months they became a couple. And when they returned to the project, they brought the energy of a new relationship to it.

“There’s a real kind of honeymoon period that people have mentioned in the earliest pictures,” Ms. Rivera said. You can see as much in “Boudoir,” from 2015, in which her hand appears, disembodied but tender, brushing Mr. Lillis’s hair.

The portraits borrow from early 20th-century fashion photography and classic cinema, where elegance can blend with the surreal. Ms. Rivera cites the early Vogue photographer Cecil Beaton as one of many influences.

The couple did as many as four shoots a week in their spare time. Some were tightly composed interiors, with props and costumes chosen by Ms. Rivera.

In another 2015 image, “Mirror With Jewels,” Mr. Lillis is reflected in a vintage makeup mirror, its frame draped with beads and jewelry, elements that help code his visage as feminine. But an almost imperceptible wave in the glass slightly exaggerates half of his face, making him appear less symmetrical than he is.

The image exposes an intimate moment between the artist and her subject. Ms. Rivera designed the image, but Mr. Lillis’s direct expression makes it connect with the viewer.

“The work really gives permission for women to look at women and for men to look at men,” Ms. Rivera said, “and for people to be nothing or anything or everything.”

They began to travel with the project in mind, finding more locations in Virginia, California and Italy, among other places. Ms. Rivera scoured hotel and Airbnb listings for the right kind of moody spaces. The images also grew larger in scale, taking in whole rooms and connecting Mr. Lillis’s poses to the setting, implying a narrative.

In “Motel, Virginia II,” Ms. Rivera wanted to call up the intrigue of a Hitchcock film, with the gathered tension in Mr. Lillis’s erect posture and his gaze — anxious or expectant? — out of the window.

For Ms. Rivera, working with her romantic partner was a revelation. “This is what Cassavetes and Fellini and Bergman must have felt like,” she said.

In other works, Ms. Rivera sought out locations with just the right atmosphere, places that tend to be at once glamorous and desolate.

Inhabiting these places is important in shaping her photographs, she said, “trying to imagine what it was like to be a woman during the time when these spaces were new. “

But Mr. Lillis is always at the center. He is often dressed gracefully, sometimes nude and always vulnerable.

In the most luxuriant images, Mr. Lillis’s expression is often pensive, with a tinge of sadness. The melancholy, he said, comes from “thinking about the reality of gender and different roles that people have been stuck in.”

But in surrendering his likeness to his partner, Mr. Lillis also found a path toward liberation. “I’m being myself in every one of these photos,” he said.

After three years of work, he added, the photographs could be seen as “an autobiography of our fantasies.”

“Beautiful Boy” runs June 1 to July 15 at ClampArt, 247 West 29th Street, Chelsea; clampart.com. Lissa Rivera and BJ Lillis will give a gallery talk there on June 10 at 3 p.m.; they will also appear at the Mid-Manhattan Library on June 22.

This sissy wishes sh.e had found ‘The House of Sissify’ sooner. You provide a special haven for us sissies and, without You, no sissy would be able to truly complete he.r sissy journey. This sissy has only joined recently, but… Read more “brandie love”

Omg, this sissy LOVES these pics!

sissy just visited again and is once more awestruck by the beauty of these pics. they would be beautiful as a collection mounted on the wall. 🙂

Love these photos but above all “Motel, Virginia II,” his pose, dress, hair, mood all speak to this sissy, so wonderfully feminine. Definitely encourage this sissy’s sisters to check out Ms. Rivera’s work beyond this page, She has some really wonderful pictures out there!

These are a beautiful set of Photographs and I am sure they will provide confidence for Lillis to continue enjoying his life as a beautiful girl. Much Love to you both Prisse xxxx