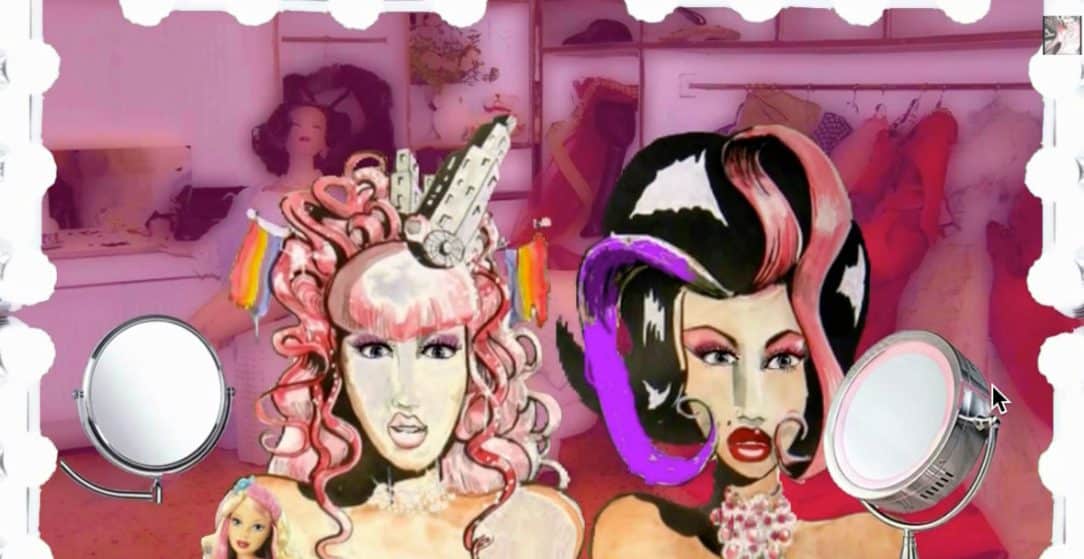 Burning Wig is the worlds first animated series about Drag Queens.   It examines the hidden world of the much misunderstood Toonsexual and the elusive Shtickvestite. Burning Wig is fun, silly and surreal.  Patrons of drag cabaret are not usually privy to what goes on in the dressing room of a show but its where the magic is happening. The banter augments friendships and magic is all woven in that enchanted place.

“Years ago I wanted to design a drag show where the wings of the theater were exposed so the audience could see the transformation of drag taking place and then its final product on stage. Boys becoming girls, It is an interesting and chaotic process.“ Says Veronica,  creator of Burning Wig. “The things I over heard or was said to me are still some of the funniest material I have ever heard.”

The characters of Vanity Kills and Veronica Vinyl are the driving force behind the 45 to 60 second vignettes that make up an episode of Burning Wig. “We decided that our characters we play on the show had to be bigger than life and more queen than any queen living or dead..” They are eternal optimists and very very sensitive to the faerie glamour they are performing at the same time 100% oblivious to anything that doesn’t conform to their phantasmagorical world.  On the downside they are vain, narccisstic and possibly superficial… but not in a way that harms others. On the plus side they are brave, passionate and in love with being Drag Queens.

Veronica states, “Animation seemed the perfect medium to present Burning wig.  In animation you can do anything.” For instance Veronica and Vanity have a Barbie styling head toy that sits between them . To them it’s a Holy Object. An ideal to be achieved. A plastic goddess that speaks to them and often finds there conversations as weird as any outside observer would. “You cant do that in a live action sitcom and still have the sitcom on the air after one season. It’s too outrageous – the audience wouldn’t buy it. In Burning wig, Barbie speaking to them is normal. We get to see inside Veronica and Vanity’s heads into the world they inhabit. That’s fun to try and capture in every episode. “

Burning Wig is done on a non existent budget each episode based on water colors done by Veronica in her basement, where she is kept.  Veronica marvels, “How does it get done at all? I mean it isn’t Walt Disney but it wants to be, also it isn’t South Park and that’s a blessing. What we hope is it’s  funny,  fabulous and pretty to look at. “

Most importantly,  the Burning Wig Team hopes to present Drag in a positive light. “It would be very easy in a cartoon to simply lampoon drag and leave it at that. I want to show what is special about it. What makes it such an amazing and beautiful jewel of sissy culture, but in a fun way. Much like Drag has always been done. Drag Queens were the shock troopers in the gay rights battle, but they were always doing it in a such a non-threatening way.  The bohemian ideals Truth, Beauty & Love in sixty seconds of comedy madness.”

This sissy has just finished he.r second month with House of Sissify! I am amazed at how friendly and helpful everyone has been to this new sissy! Jamie is on chat almost every day for an hour or so catching… Read more “jamie”