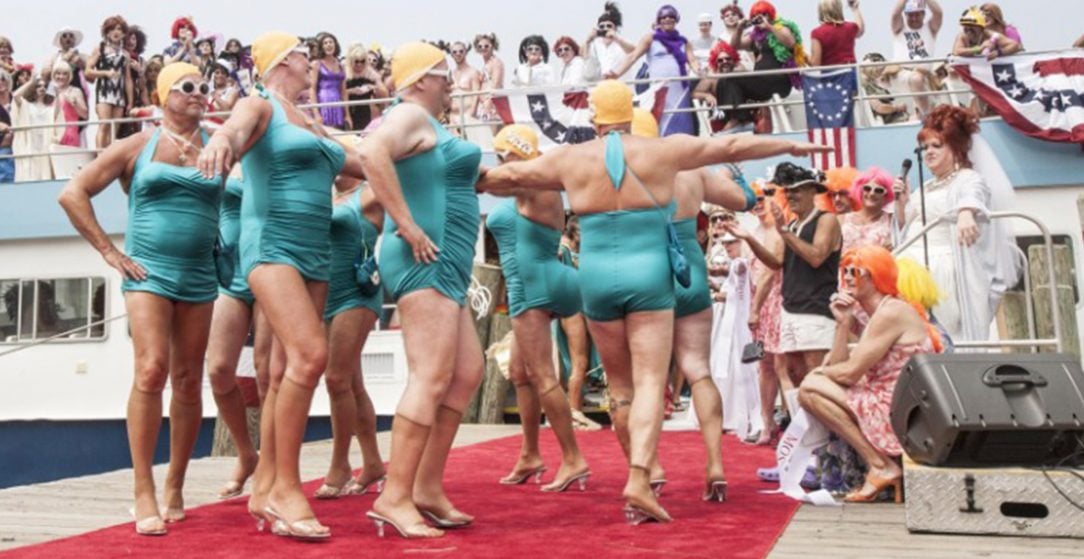 While most vanilla folks Fourth of July plans may include a hearty barbecue and some fireworks, something girlish and more spectacular has been going on in Fire Island, off the coast of Long Island, New York, for over 40 years.

“The Invasion of the Pines” is an event in which drag queens, trannies and sissies, and their loving fans come together to declare their independence.
This year’s Homecoming Queen is San Francisco’s Ginger Snap and her theme is Studio 54.
You can expect massive crowds to watch performers don topical and fantastical costumes and, generally, just have a blast. 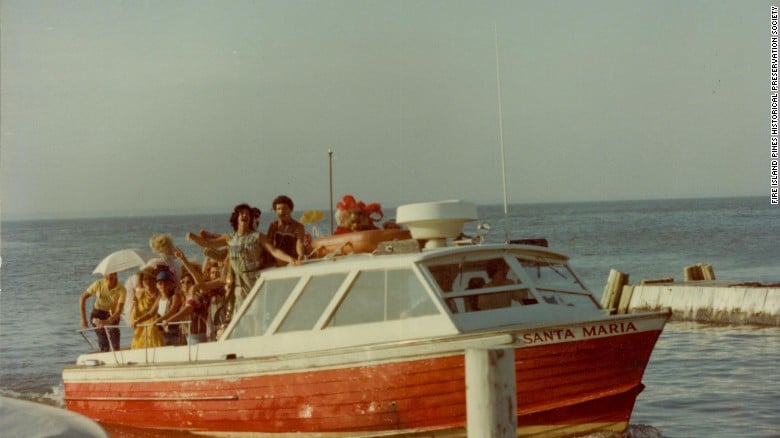 Local lore goes that around May 1976, a drag queen named Teri Warren was denied service at an establishment in a more posh and conservative section of the island because he was in full drag. The owner, John Whyte, it is said, claimed it was a “family restaurant.”
Warren and his friends became more incensed about the incident as time passed. July Fourth was nearing and the United States was preparing for its bicentennial, with hundreds of ships from all over the world coming to New York to celebrate.
Thom Hansen, 63, is also known as the drag queen Panzi.
As a friend of Warren’s, Hansen says he was the “instigator” to take a stand.
On the Fourth that year, Hansen was in his house in the more liberal Grove section of Fire Island celebrating the bicentennial with two women and seven men.
It was then and there that they were inspired to dress in full drag, form their own flotilla on a water taxi and storm the beach in the neighboring community.

“We took the boat into the Pines harbor and we were absolutely terrified,” Hansen says. “We were all gung ho while we were sitting there drinking having a hell of a good time, saying ‘yeah, yeah, let’s go show them’… when we really got there we panicked.”
Except the reception was grand.

As Hansen tells it, their water taxi approached the pier and “like over a thousand people were focused on this little boat we were in.” Eventually someone asked Amelia Migiliaccio, one of the women on board, “What are you doing here?” Panzi replied: “Tell them I’ve come to bless the harbor.”

Hansen was elected Homecoming Queen that first year and the next.

For independence, fun and love

For the second year of the Invasion, the number of main participants grew from nine to 19.
“It was just pure camp, pure fun,” Hansen recalls. “We were celebrating cross-dressing, we were getting our message across and at the same time we were having a good time.”
Susan Kravitz, 73, is a photographer with a background in sociology who has been attending the event on and off since 1985. 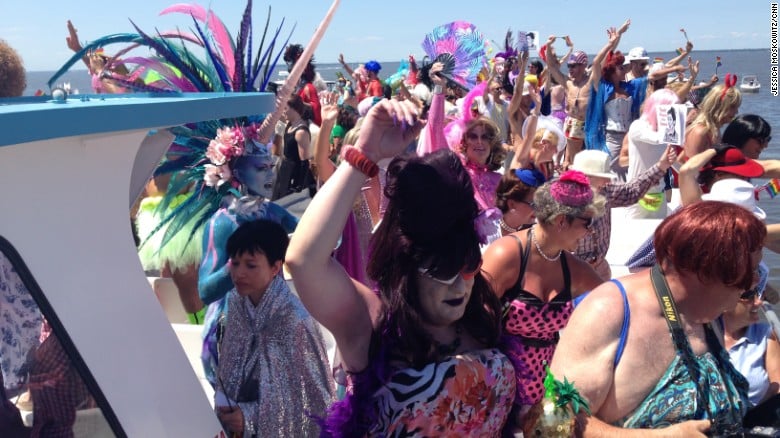 She documents the experience in her book “Mascara, Mirth & Mayhem: Independence Day on Fire Island.”
Kravitz says the Invasion has been important and meaningful to people fighting for their human rights and freedom of expression.
In the book, she highlights the climate during the 1980s and 1990s — the height of the AIDS epidemic — saying it was a time of “so much death” but “the Invasion continued as a time to let go of illness.” 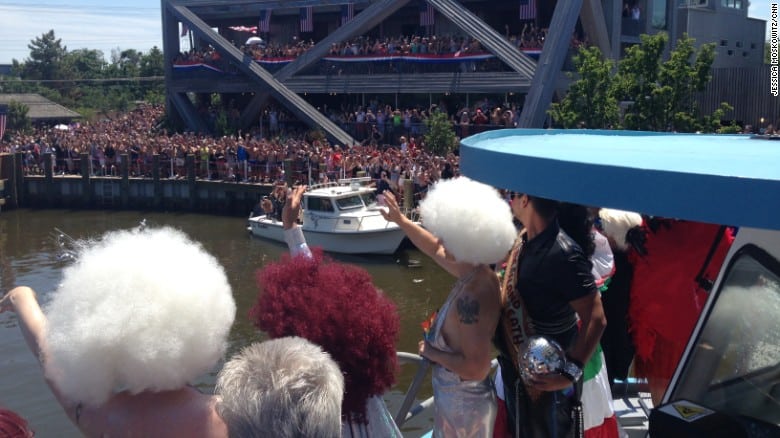 Lorraine Michels has been documenting the Invasion since 1994 and also published a book: “The Invasion of the Pines: 40 Years of Fun, Frolic & Fantasy, 1976-2015.”
Michels, whose partner, Joan Van Ness, is the only female Homecoming Queen in the event’s history, describes the “glitz, glam, creativity, pride and excitement” of the day. The “feeling of family, it’s indescribable” she says. This year she plans to dress in white with a sequined red, white and blue vest.
Images from both books show drag queens dressed as Marilyn Monroe, nuns, Dorothy, Liza Minnelli, Cat Woman, Elvis, 1920s flappers, showgirls, Girl Scouts, the Pope and Jacqueline Kennedy.
Justin Johnson, also known as Alyssa Edwards from “RuPaul’s Drag Race,” is a performer who first experienced the Invasion in 2016 and will be hosting a pool party again this year.
Johnson says he only knew he was going to host an event, but when the boat pulled up “it was unbelievable.”
“I think this event is so full of love,” Johnson says.
“It’s an Independence extravaganza encompassed by love.”

Hansen (Panzi) says the Invasion is not affiliated with any political party, but that doesn’t mean politics don’t come into play. 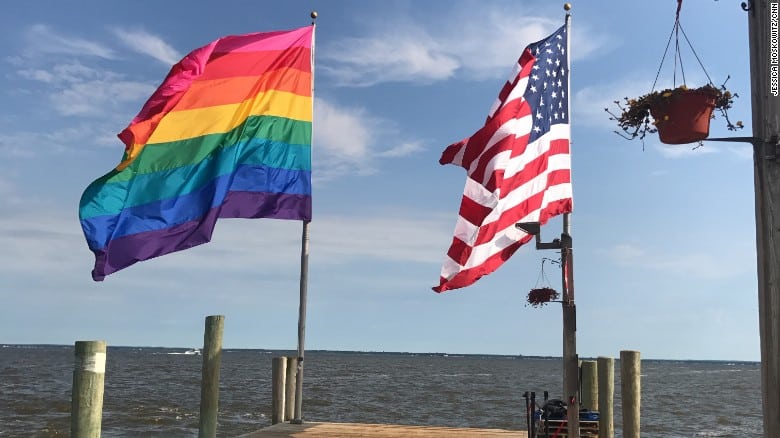 “Although it’s not political in nature, I have over the years been known to make political statements,” Hansen says.

What can people expect this year?
*SPOILER ALERT: Hansen’s outfit is getting topical.*
“All of the people who are working to sell the tickets and security will be dressed as Mexicans, and I will be dressed as a Mexican senorita,” he says.

“And my entrance will be breaking through the wall.”

Another gesture the audience will notice is a tribute to Gilbert Baker, the man who designed the rainbow flag.

Baker passed away this year, so Hansen says everyone on the boat will be carrying a rainbow flag to honor his memory.

“When we go into the Pines harbor we’ll all wave it … and we’ll have a moment of silence for him on the dock, so that’s another statement.” 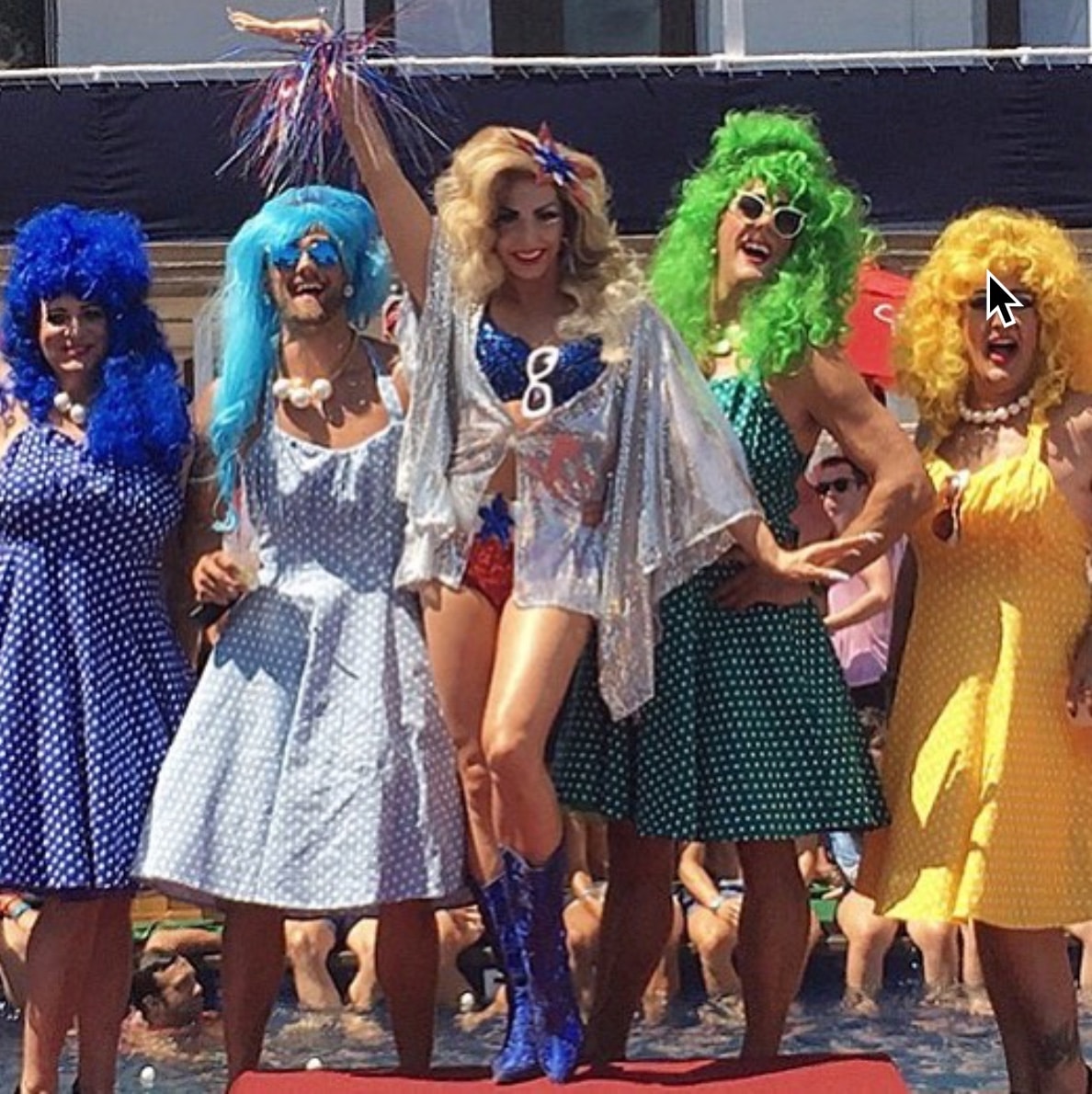 It has only been a week but what a week this site is awesome and the Staff is so wonderful to deal with i am an older sissy and sadly my wife could never know. that’s sad because our life… Read more “lola”