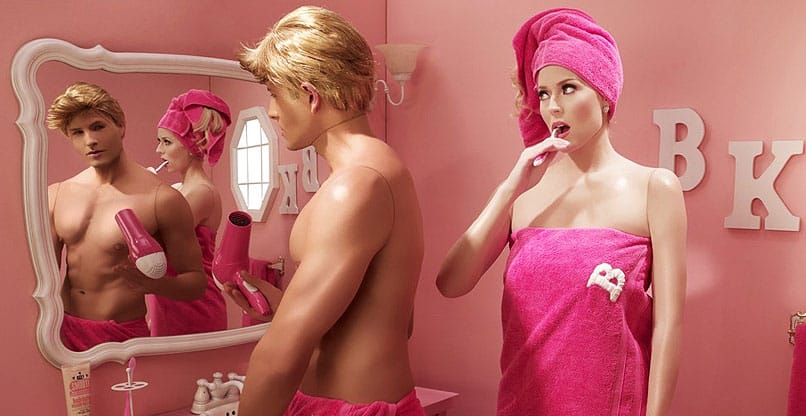 Brent Kroeger pores over nasty online comments about stay-at-home dads, wondering if his friends think those things about him. The Rowland Heights father remembers high school classmates laughing when he said he wanted to be a “house husband.” He avoids mentioning it on Facebook.

“I don’t want other men to look at me like less of a man,” Kroeger said.

His fears are tied to a bigger phenomenon: The gender revolution has been lopsided. Even as American society has seen sweeping transformations — expanding roles for women, surging tolerance for homosexuality — popular ideas about masculinity seem to have stagnated.

While women have broken into fields once dominated by men, such as business, medicine and law, men have been slower to pursue nursing, teach preschool, or take jobs as administrative assistants. Census data and surveys show that men remain rare in stereotypically feminine positions.

When it comes to progress of gender roles, said Ronald F. Levant, editor of the journal Psychology of Men and Masculinity, “men are stuck.”

The imbalance appears at work and at home: Working mothers have become ordinary, but stay-at-home fathers exist in only 1% of married couples with kids under age 15, according to U.S. Census Bureau data.

In a recent survey, 51% of Americans told the Pew Research Center that children were better off if their mother was at home. Only 8% said the same about fathers. Even seeking time off can be troublesome for men: One University of South Florida study found that college students rated hypothetical employees wanting flexible schedules as less masculine.

Other research points to an enduring stigma for boys whose behavior is seen as feminine. “If girls call themselves tomboys, it’s with a sense of pride,” said University of Illinois at Chicago sociology professor Barbara Risman. “But boys make fun of other boys if they step just a little outside the rigid masculine stereotype.”

Two years ago, for instance, a Global Toy Experts survey found that more than half of mothers wouldn’t give a doll to someone else’s son, while only 32% said the same about giving cars or trucks to a girl. Several studies have found that bending gender stereotypes in childhood is tied to worse anxiety for men than women in adulthood.

In the southern end of Orange County, former friends have stopped talking to Lori Duron and her husband. Slurs and threats arrive by email. Their son calls himself a boy, but has gravitated toward Barbies, Disney princesses and pink since he was a toddler. In a blog and a book she wrote, Duron chronicles worries that would seem trivial if her child were a girl: Whether he would be teased for his rainbowy backpack. Whether a Santa would look askance at him for wanting a doll.

Beyond childhood, the gender imbalance remains stark when students choose college majors: Between 1971 and 2011, a growing share of degrees in biology, business and other historically male majors went to women, an analysis by University of Maryland, College Park sociologist Philip N. Cohen shows. Yet fields like education and the arts remained heavily female, as few men moved the opposite way. Federal data show that last year less than 2% of preschool and kindergarten teachers were men.

In the last 40 years, “women have said, ‘Wait a minute, we are competent and assertive and ambitious,'” claiming a wider range of roles, said Michael Kimmel, executive director of the Center for the Study of Men and Masculinities at Stony Brook University. But “men have not said, ‘We’re kind, gentle, compassionate and nurturing.'”

As the Durons and other families have discovered, messages of gender norms trickle down early. In Oregon, Griffin Bates was stunned when the little boy she was raising with her lesbian partner at the time came back from a visit with Grandma and Grandpa without his beloved tutu and tiara.

“They were perfectly OK with his mother being gay,” Bates said. “But they weren’t OK with their grandson playing dress-up in a tutu.”

Boys stick with typically masculine toys and games much more consistently than girls adhere to feminine ones, Harvard School of Public Health research associate Andrea L. Roberts found. Biologically male children who defy those norms are referred to doctors much earlier than biologically female ones who disdain “girl things,” said Johanna Olson of the Center for Transyouth Health and Development at Children’s Hospital Los Angeles. Even the criteria for diagnosing gender dysphoria were historically much broader for effeminate boys than for masculine girls.

Why? “Masculinity is valued more than femininity,” University of Utah law professor Clifford Rosky said. “So there’s less worry about girls than about boys.”

Gender stereotypes do seem to have loosened: The Global Toy Experts survey found that most mothers would let their own sons play with dolls and dress-up sets, even if they shied from buying them for other boys. Parents in some parts of Los Angeles said their boys got barely any flak for choosing pink sneakers or toting dolls to school. And in a recent online survey by advertising agency DDB Worldwide, nearly three quarters of Americans surveyed said stay-at-home dads were just as good at parenting as stay-at-home moms.

But while attitudes may have shifted, Rosky said, “nothing changes until men are willing to act.”

Some experts say economic barriers have stopped men from moving further into feminized fields. Jobs held by women tend to pay less, an imbalance rooted in the historical assumption that women were not breadwinners. Women had an economic reason to take many of the jobs monopolized by men, particularly college-educated women trying to climb the economic ladder.

Yet it isn’t just economics that keeps men from typically female jobs. Men are still rare in nursing, for instance, despite respectable pay. England and other scholars see that dearth as another form of sexism, in which things historically associated with women are devalued.

Men who do enter heavily female fields are often prodded into other ones without even searching, as other people suggest new gigs that better fit the masculine stereotype, said Julie A. Kmec, associate professor of sociology at Washington State University.

While women have “come out” to their families as people who want a life outside the home, men have not “come out” at work as involved fathers, Kimmel said. And that, in turn, holds many working mothers back, Risman argued.

Familiar measures of progress toward gender equality, such as women working in management or men picking up housework, began to plateau in the 1990s. Cohen found that in the first decade of the millennium jobs stayed similarly segregated by gender — the first time since 1960 that gender integration in the workplace had slowed to a virtual halt.

“If men don’t feel free to go into women’s jobs,” said Risman, a scholar at the Council on Contemporary Families, “women are not really free.”