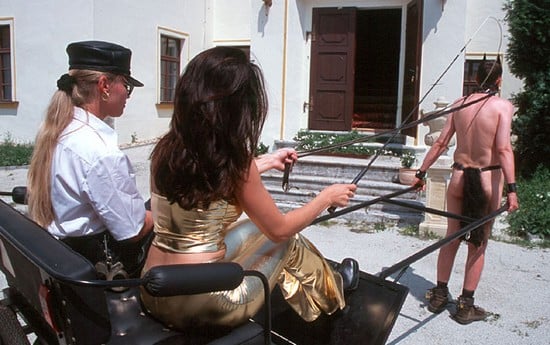 There is a 16th century castle in the Czech. Republic where Women rule and all men serve. This not a fantasy…. this a reality. Imagine a huge complex with high walls, security camera surveillance and grounds where pony boys pull carriages and live as animals. Where sissies serve as maids everyday. Where a submissive can become a kitty or a dog and much more. A world out side the world. It has its own all female police force its own court laws and currency. And it is 100% percent absolutely REAL. Not the wild imaginings of some writer or scribblings of a sex deprived comic artist. Brick and mortar structures ruled over by the mysterious Queen Patricia I.

And just this morning i found out that it is closing…..

This cannot stand. Ever since i first heard about the Other World Kingdom about six years ago, it has been a very important secret dream of mine to go. Heck, i know at least another dozen or so people Domme and Submissive alike that harbor the same fantasies. It is more than just another failing concern. It is a symbol. It is magical place in our minds whose halls harbor millions of feverish dreams held by and cherished by submissves imagining a place where who and what they are has a purpose. It also is the subject of Superior ladies musings as they imagine a place where the Superior Lady is truly treated as they should be treated and where there word is law.

To the rest of the world the OWK disappearing will be a blip on the weird news page of news papers and a smirking story girlishly tittered by talking heads at the end of news casts on a slow news day…if it is that. For folks like us, however, its like telling a child that Never Land has been flooded with toxic waste…. or Hogwarts has gone Condo. For Fem Domme worshipers like ‘lil ole me its almost too sad to bear.

i don’t think i can stand it again. My first home of my heart was a theater company in this spectacular Victorian theater which was torn down and turned into a Walgreens drug store. My second home was the fabulous Queen Mary Show Lounge In Hollywood, which boasted the longest running continuous drag show in the world. 40 years! It was sold… And now the OWK. Now the pecker heads are going after the real estate of my fantasies… and thats not right.

All of these places provide refuge for the fringe folk. An oasis for the different thinker. Havens for what the Cenobite in Hell Raiser called “Explorers in the outer realms of human experience” and the world shrinks, turns a shade paler and withers a tiny bit.

This morning on Max Fisch where i read the news two submissives were making snarky comments. It seemed so direspectful…. good or bad. The idea is glorious and deserves a least some dignity.

Is there a way to preserve this? Do i have the strength and the will to tilt at this windmill and prevail? Am i Don Quixote in a dress? i don’t have clue. i’m a sissy for christssake. I’m way over my head here.

i guess what i’m asking is…. is there anybody else out there that cares? Am i being a sappy reactionary queen again? Getting all emotional over what is simply unstoppable? How would i go about making something happen? Who will help me? All i know is in my world i cant afford any more of my little dreams to fade away. How bout you?

This is the greatest find to date. Thank you, Superiors.