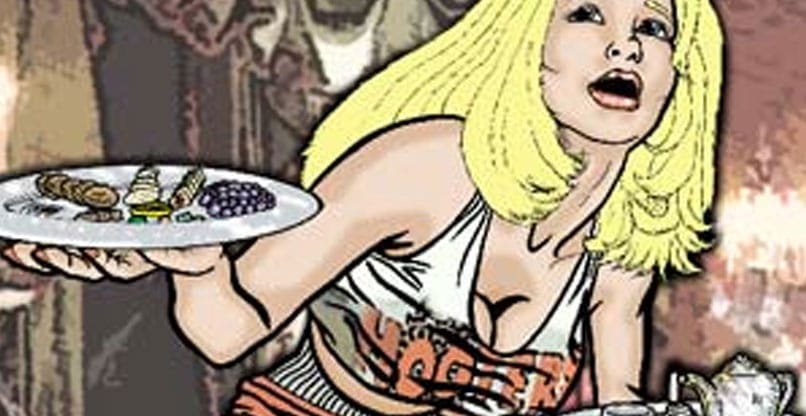 Fuming quietly in her private office, a slim stream of cigarette smoke curling slowly upward from her crimson lips, Ms. Cassandra Wilkinson, recent inheritor of a lucrative “Hooters” restaurant, contemplated the villainy of lawyers. The specific focus of Cassandra’s wrath was the civil rights law firm that had brought suit against her restaurant for only hiring women as “hooter’s girls.”

She slowly drew on her cigarette as her anger was momentarily displaced by the pleasurable memory of how she’d put it to her lecherous fuck of a step-father, putting an end to his leering and his “casual” pats on her ass when he could get away with it. But those pleasant memories soon gave way to renewed contemplation of her present predicament. How was she going to keep her profits up while hiring men to work as Hooter’s Girls, as the fucking court had ordained?

Despite her anger, Cassandra looked as cool as always, her tailored black and red business suit complimenting her jet-black hair, pale skin, and crimson nails in a way that just screamed refinement. Pouring herself two fingers of scotch, Cassandra leaned back in her chair, one leg crossed over the other, and set her powerful mind to the task of figuring out a solution to her problem.

Cassandra was still engrossed in those thoughts half-an-hour later when her office door opened after a gentle rap, to admit her personal servant with afternoon tea. As always, the ridiculous appearance of Candi brought a smile to Cassandra’s face despite her preoccupation. It was a very sadistic smile.

click to enlargeCandi minced across the office floor, carrying the silver tray that bore Cassandra’s favorite silver tea service, a family heirloom passed from mother to daughter for generations. Cassandra insisted that it be kept immaculate despite the required daily cleanings that were needed to keep it free of tarnish. Candi’s seven-inch heels made little noise on the office’s Berber rug, but it was clearly an effort for her to walk gracefully. That, after all, was why Cassandra bought the rug. Candi was Cassandra’s masterpiece, after all, and it was worth the cost of the carpet to show her off to best effect.

Candi was the recipient of more than a few surgical enhancements to her feminine beauty at Cassandra’s expense. From the huge mane of blond hair to the carefully manicured toenails, Candi’s every feature proclaimed her bimbohood. But what Cassandra found particularly amusing was what she’d done to Candi’s tits. They were truly amazing in size, looking for all the world like a pair of beachballs mounted on a barbie doll’s chest. It was obvious that moving around with those monsters was a constant source of back pain despite the corset which was visible beneath her skimpy “Hooter’s” T-shirt and short-shorts. The lines of her garters were also visible through the shorts, while it was quite clear that she wore no other underwear. Even her heart-shaped patch of pubic hair cast a noticeable shadow through the thin fabric of the shorts.

Just for the sake of making Candi speak, Cassandra addressed her servant. “I hope that my tea isn’t too weak, Candi. You know how upset that makes me, and I’m already having a bad day.” She waited eagerly for the girl’s response, knowing how much Candi hated to speak. You see, despite her ridiculously huge breasts, her surgically super-plump lips, and all the other modifications that Cassandra had performed, Candi’s voice was among the most humiliating. Candi sighed softly, and in a comically high and breathy voice, said “I’m sorry you’re having a bad day, Miss Cassandra, I tried to make your tea the proper strength today, Ma’am.” Cassandra reflected that the surgeon who modified Candi’s vocal cords had been worth every cent.

Setting the tray down on a nearby lateral-file cum sideboard, Candi carefully poured and prepared a cup of tea according to Cassandra’s wishes, and brought it to her on a smaller tray that also carried Cassandra’s favorite fruits, crackers, and tea biscuits. Taking a duster out of a nearby supply closet, Candi set about straightening the office while the Mistress ate, insuring that the ashtrays were spotless (Candi shuddered at the memory of the punishment when one was left with a smear on the bottom–the sour taste of ashes lingered along with the humiliating memory of having to *be* the Mistress’ ashtray for a day).

As Cassandra finished her tea and dropped her napkin to the tray, her solution came to her, literally, as Candi minced over to take away the refuse, and she laughed delightedly. Candi shivered as though a cold wind had just entered the room, and hurried to leave before finding out what horrible humiliation waited for someone behind that laughter.

Before reaching the door, however, Candi heard the Mistress’ order to “display!,” and knowing the penalty for disobedience, complied immediately. Bending over deeply from the waist and setting the tea-tray on the floor to the side, Candi stood with legs spread wide, and reached back to pull open the short’s velcro crotch panel to “display,” the horrible device at her groin.

Cassandra savored the delicious irony of it, that Candi, once Cassandra’s macho and dictatorial step-father Carl, now literally fucked himself most of the time, giving himself urine enemas through the one-way valve every time he peed, and having to beg Cassandra for the key in that ridiculous voice when the cramps grew too intense to bear.

A year later, Cassandra laughed delightedly as she read the newest letter from the Justice department. “Dear Ms. Wilkinson,” read the letter from the Equal Employment Opportunity Commission, “We are pleased to bestow upon you this letter of commendation, in tribute to your prompt sexual integration of your establishment. While we cannot quite understand how you managed to entice both the prosecutors from this office and the entire legal firm which initially prosecuted the sexual discrimination case into relinquishing their legal practices in favor of becoming restaurant servers, our experts have confirmed that you have indeed hired male servers as fifty percent of your staff, though genetic testing was needed to confirm this. We have also documented that you have them working at the same positions as your female servers, at the same salary. Having come by to visit your establishment myself, I must say that I feel that the discipline of your establishment has improved the status of these men immensely. Again, thank you for your cooperation in this matter.”

Cassandra laughed as she saw who signed the letter – the woman who had been a lowly assistant to one of her new “girls,” a civil rights lawyer known for pressuring his female clerks into sexual activities as a condition of employment. It had been a challenge, arranging for the seductions and blackmail of so many men, but in the end, it hadn’t been that difficult. Half of them were glad to find their own way out of their lives after they fell for the videotaped seduction of professional shemales. Rather than have their families and friends see the tape, they thought that “pretending” to be Hooters girls for “a few days” to help Cassandra out of her problem would be no problem. Of course, after waking from a drugged sleep on the second morning to find they’d been castrated, some had changed their minds, but Cassandra had friends in odd places, and a bit of mental “reconditioning” had worked wonders. And after she made an example of one hard-case by snatching his youngest son and videotaping his conversion into a shemale whore in the phillipines, the others fell into line to protect the only children they could ever have. Of course, they’d had no idea back then what would befall them, and they’d had some state-of-the-art brain implants long since, to insure their cooperation, and prevent them from committing suicide.

“Well “daddy,” Cassandra said, turning to Candi, “I’ve saved the family business! Aren’t you proud of me? What’s that dear? I’m afraid I can’t understand you. Oh! You’re sucking cock again, I see. Trying to match the lawyers, daddy? Well, don’t worry, you don’t have to say anything, I know how proud you are. And I haven’t forgotten you, “daddy,” I’ve made sure you’ll be very busy. I’ve booked a new cock for your mouth every half hour, on the hour.” Walking up behind Candi, Cassandra gestured for the man in Candi’s throat to withdraw, and as soon as he had, Cassandra kicked Candi in the crotch again, and as Candi convulsed in pain, Cassandra watched the john flip Candi’s ass up, unplug the dildo, and fuck her powerfully. “Oh, did I forget to mention it? I’ve set you up with guys that like little shemale freaks like you, so you’ll be happily used at both ends. Have a nice night, “daddy.”” Cassandra extinguished the cigarette she held, grinding it under her shoe, then offering her shoe for Candi to lick clean. Candi licked eagerly, still frightened of Cassandra despite his degradation…after all, who knew what Cassandra might do if she was really angry?