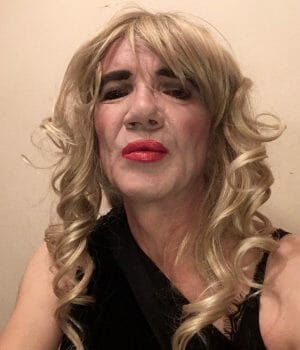 Sissy felicity loves to dress up, and makeup is such a personal thing. It feels so feminine, so sissy so wonderful.

Sissy Shopping:
This sissy was too shy to approach a real woman on the counter. Sissy sneaked a few small items through the self service part of a couple of superstores, and got the rest from those helpful online shops.

A mirror:
This sissy felicity was already blessed with a fabulous mirror on entering her new abode, it flips over and even magnifies everything wonderfully, is not sissy blessed!

Sponges:
Yes, sponges. Well felicity forgot to buy them. Silly girl! However redeemed her sissy self by cutting up some sponge stuff that came with her new washing machine that makes all her lovely girly clothes all clean and smelling lovely again, and yes they do work remarkably well as makeup sponges.

A Puff:
This sissy so desires a puff and is so jealous of any sissy’s who actually possess one, lucky girls! This sissy dreams of one day being able to own one! *sigh*

Brushes:
Yes brushes in all shapes and sizes does felicity have. They reside in a very neat cylindrical tube that unfastens with two bronze buttons. Sissy is so proud of all her brushes and the wonderful place that they live in, until called to duty, which they do so well, and so cute too.. mmm sissy loves all of them equally! xx

Tweezers:
felicity did not own tweezers until earlier this very week. On the plus side she did buy them from a real shop and the assistant was very helpful, he even wrapped them for me, gosh! Sissy plucked vigorously on her return to sissy base, no stray hairs now nope.

Concealer:
Well sissy did her level best to get concealer appropriate to her skin tone and well it really makes a difference doesn’t it whether its one or two shades lighter gosh! *blushing* In all truth felicity doesn’t know if it is two shades lighter not but she hopes it is sufficient to be attractive, and goodness knows felicity needs any help she can.

A few words on Shaping your Eyebrows:
The advice is only to pluck the ungainly hairs below (and not above) but if you had felicity’s (previously) massed eyebrow hair you would have to pluck the huge, unwomanly, horrid simply horrid hairs that grew above the eyebrow too I mean really!! One has to do what a girl simply must (to be more feminine) when the need arises. The act of removing non-feminine eyebrow hairs with the previously mentioned tweezers (don’t you just love that word?! gosh) was quite beautiful, so felicity felt even if so many were above the browline.

Eye Shadow Base:
This is something that felicity forgot silly girly! Only found out about when she stated to write her report! The sissy is so sorry and she will seek for the eye shadow base to ease her curious girly nature on how to be perfectly gorgeous, promise! xx

Foundation:
The very thing of foundation that smoothes everything into a lovely, dreamy kind of she-ness oh how sissy loves that. The five spots became seven spots to facilitate hiding of manly facial hair (even after shaving dilligently. Lashings of foundation all round, and so amazing how it hides the hidden things that concealer hides, without showing the concealer, full marks all round! Sissy loves the smooth svelteness of foundation mmm..

Loose Powder
So lovely how this help to soften blush (see below) amongst other things. Sissy chose a lightening subdued sparkle powder.

Blush:
The blush sissy applied was a very pale pink, and she was careful only to blush the apple of the cheek verging mostly below the cheek but even with that it was very noticeable felicity felt so she used the loose powder (applied with its own brush) to make it blend in more.

Eye Pencil:
It’s not usual for felicity but sissy did get some advice from a higher (born as Female) being that advised only to use the eye pencil halfway (from outside to inside) on lower eyelid. Apparently this makes the eyes look bigger and sissy agrees.

Defining
The use of powder to enhance lash fulfilment was new to sissy but she followed the advice, and it works.

Brow Colour:
felicity just went total dark for definition even though she was blonde for this exercise, its like she doesn’t know why but her feminine intuition said she must, she so hope’s it is acceptable.

Mascara:
The wiggling motion suggested really worked so well! Also doing the first application much earlier, followed by repeat applications in between doing the other lovely things. The use of an eyebrow curler was the biggest thing though, its like wow! And feels so girly to do that!

Lip Pencil:
This is so important, it helps to avoid lipstick ‘bleeding’ that ruins the clean (very sissy hopes!) kissable lips. Outline the lips with lip pencil first then fill in with lipstick afterwards yes, so works!

Lipstick:
When sissy felicity first applied lipstick (some time ago) she used to follow the 8-step plan but now she does it so effortlessly with broad strokes from left to right, and vice versa. If the lip pencil is applied correctly then it makes the application of lipstick so easy! sissy also used some lip gloss on top of the lipstick to give it extra shine, and hopefully kissability.. xx

sweet Scottish sister = sissy just reread the report because it is so god to help go through each facet of makeup! such a fine reports, sister.

What a beautiful energy crowned by spark of your beauty! This sissy would like to most humbly say: that’s how changes takes place 🙂

dear beautiful sister! this report is simply fantastic. sissy hopes every sister has a chance to read it. if the House allows you to copy and paste under the topic of makeup it would be such a help for all sisters. it’s so good sissy would post it too. thank you, thank you, thank you dear sister

Oh Madame Stewart *girly curtsey* why thank You Mistress!! gosh sissy is so pleased You like it, sissy felicity really tried her best *flutters eyelashes and looks adoringly up to Goddess* xOx

Thank you too princess sissy, such praise not sure silly slut deserves it so, but thank you sweety *blushing* And shall twy xx

Oh my gosh lana ross thank you honey, makes me feel good inside my girly sissyness *blows kisses* means a lot to me xx