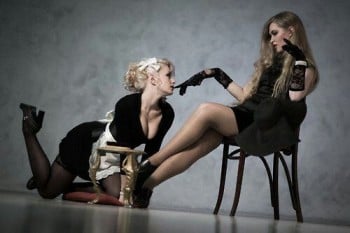 Sissy gabs began reading and studying the teachings of Zen of Servitude shortly after s.he signed up for the House, s.he thought: how could this girl put aside her male selfishness and be a good, submissive and helpful bitch?

The instructions of Zen of Servitude were exactly what this girl needed! S.he began to read every morning when s.he went to work, and soon afterwards went to college. Many times s.he left her tiredness aside to read and memorize what needed to change and improve before bed, lying and snug in her panties.

This girl focused on the issues that Zen training was presented to her:

Aggressive to Passive: This girl remained calm even when s.he was humiliated by someone who was not her Superior or by request of the House. S.he kept her feminine and submissive essence, her posture gracious. When asked why s.he was so passive, s.he said s.he had been watching videos that were helping her to be calmer. (Which is not at all a lie since this girl has been listening and seeing many files of sissy hypnosis at the behest of her Owner).

Stoic to Emotional: gabs has tried to feel more emotional about life, mainly about his owner’s things, what s.he talks, thinks and watches. We went to see a romantic movie and while this girl massaged the feet of her superiro in the cinema this little girl did not stop to be moved by the film. It was a good and revealing experience; s.he felt freer and younger.

Self Centered to Self Effacing: This girl has always been shy, and does not like to draw attention, s.he has difficulty even when ordered. So it was easy for her to understand what the House wanted from her. S.he held herself back and would open only to her Owner or to the House.

Demanding to Giving, In – Charge to Reliant and Commanding to Obedient: A little girl like that, is not in charge ah long time, being the maid of my Owner s.he learned very early to put what Dona wants above that that useless bitch wants, and learned how good it is for her and to please her Higher Sovereign. Learning to give more than receiving is a very important aspect to this sissy, to feel pleasure in massaging, pleasing, and humbling oneself for the sake of your Owner is what makes this girl happy. S.he just had to adapt it to make it more girly, sissy, more feminine.

Hard to Soft and Roug to Smooth: This girl has always liked delicacy and gentleness. On a special day after having been used with gratitude by his Owner, s.he felt a little girl’s desire, go out and shop. S.he swung out on the sidewalk, ashamed of herself, but content to do what was right. S.he bought feminine tampons, new razors and the most delicious, moisturizing cream. S.he took a relaxing bubble bath, rubbed herself as s.he read in other instructions of the house, passed the cream and scraped where her mistress allowed (unfortunately this girl is doing everything hidden, so s.he can not shave all over, s.he was kind of sad, but orders are orders). Outside the bath, passing the moisturizer i felt so feminine and soft, fragrant and delicate, it was a refreshing experience, i felt reborn, a new sissy! When i met my Lady, s.he complimented me, my bust, my belly, girly parts were soft and scented like never before. It was a simple but very important experience for this girl. Soft for the touch of your Owner, as it should be.

Mandatory panties: This girl always feels fragile and available, easy and ready when wearing her panties. His Mistress did not allow her to wear panties all day at first, but then changed her mind and became an order like the House. The girl is excited, Owner said s.he will buy new panties for her, one for each day, i’m so excited! i especially asked for two roses with white frills, and a wine color, so sexy and little girl.

Walking, kneeling and sitting: My Dona always said that i walked like a girl, before s.he even decided that i would serve her better as a ssisy. S.he told me to correct more of my posture and always move my hips, it was very difficult and i was corrected several times and in one of them i received a well-deserved spank for not obeying the Owner the way s.he ordered. S.he said the next step will be with my new heels, i can not wait!

A submissive slut like that always liked to kneel, but to do as the House asked, like a sissy, delicate and sneaky was a great challenge that i learned very fast!

i always sat back, but i took the House instruction seriously, kept my legs together on the subway, bus, and sitting in the classroom and at work. Such a little girl! i was not envious of the real men around me, with their legs open, i think it’s good to observe what could be a real fun in their pants.

Punishment, women studies and redemption: Being punished is being polite, submissive, and helpful. Keeping the ssisy essence while being beaten was something that needed time, but my Dona helped double the punishment when i behaved in a truculent way. In the end, keeping the posture in a feminine and restrained manner was achieved, even with some marks on the back of the sissy. Treating women (who are superior because they are full women, much higher than a sissy) in addition to what education was easy to do, connecting with them was enjoyable. Like talking about various things at work, giving up my place on public transport for them, holding their bags and purses, asking how their day was and what they’re doing at home, so exciting, so feminine.

i hope that the House and my Superiors like my writing, i hope it does not get too big as well. i thank the House for the wonderful instructions. Kisses!