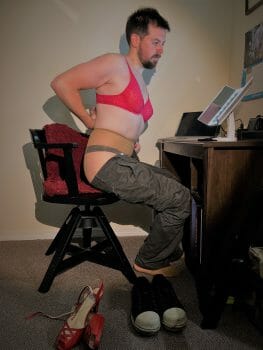 As long as she can remember, abbie has not felt like “one of the boys”. Even as a young child she remembers “Oklahoma!”, and “Seven Brides for Seven Brothers” as some of her favorite movies because she liked to dance along with the songs. She even remembers once when her Sister dressed her up in a ballerina costume (and abbie liked it!).
As she got older and was immersed in the “cult of masculinity”, she learned to appreciate the value of physical exercise, competition, comraderie, and sports, which she still to some extent enjoys today. Even through those years, she felt separate from other men, different. A certain secret softness always held her back.

Now abbie knows that softness was her femininity, her sissy nature gently moaning to come out. For all these years, abbie’s “other” has stifled her, tried to choke her out of existence but one cannot destroy a part of oneself without terrible repercussions. For that is what sissy abbie and her “other” have come to agree upon, that they need each other; to destroy one is to destroy both. In a metaphysical sense, she and the other are dual-souled – one masculine, the other feminine and a balance had to be struck.

For now the balance must be kept, and her worldly obligations met. The “other” continues to go to work, run errands, meet with friends and family, otherwise continue as “normal”. All the while abbie secretly has her way – only panties and, from now on, hosiery as well. In return, at home abbie rules the roost (so to speak – she is under House rule and is avidly working on completing her sissy assignments). she dreams that a Mistress will collar her and take a firm hand to ensure she is properly trained. But as a tradeoff, as my sweet sisters and honored Superiors have no doubt noticed, she has agreed to keep the beard (for now!) even though she would much rather have it gone.
abbie hopes that she has not gone on too long and revealed anything that would make her sweet sisters and beautiful Superiors think less of her, but this is what she found in her heart when meditating on being a secret sissy and what it means to her. she is so grateful and humbled to have a place that she can speak openly of these things and will support her on her journey to being a passive, obedient, pretty little sissy and show that “other” what it is like to be denied and shamed!

P.S. When she was young, her Mother once told her what her name would have been had she been born with a real vagina. Thus she has taken that name for herself, abbie (or abigail if she’s been naughty).