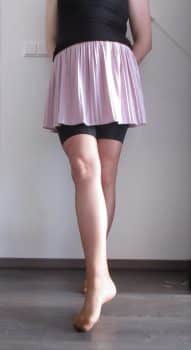 sissy laura has spent no less than a few HOURS this morning on her shaving assignment.
It sure takes time for a sissy to become pretty….

It wasn’t exactly the frist time this sissy has shaven, but it was the first time trying to do so by House requirements. And the sissy is saddened to report she far from succeeded properly….

This sissy has been out of maintenence for quite a while. She has no Mistress or Superior to guide her, and her discipline is sorely lacking.

However, with a few days off from work in the upcoming week, the sissy thought it was time to start her training properly, so after reading a lot on this website, she decided to start with the shaving assignment.

Thing was, the sissy lacked the proper supplies. She did however have the inferior tools used on previous shaving attempts, consisting of male razors and shaving cream.

The sissy started by drawing herself a bath, and giving herself a little pedicure while the tub was filling, clipping and filing her toenails nice and smooth. The sissy wanted to wear pantyhose after her shaving, after all, and wanted no runs in them for getting stuck behind a toenail.

After the required 10 minute soaking, she started to work. But the removal of hair easily took 4 or 5 tries. Perhaps because they were the wrong razors, perhaps because the sissy was so awfully hairy (didn’t she mention she was out of maintenance for a while?….), or perhaps the inexperience of the sissy played a part.

Either way, after a full 2 hours, the sissy had succeeded in shaving nothing more than her legs.

Credit where it’s due though, it was the most thorough shaving job the sissy has ever experienced on her sissy legs!

Now those shaven legs are covered in pantyhose, and it feels amazing! ^_^

Anyway, unfortunately, 2 hours was about the only time the sissy had for shaving properly… She did use scissors to clip away the most part of her upper body hair, hoping this will save time for the next time she shaves. This sissy really wants to try and be properly hairless below the neck, before the week ends, which possibly means 2 more shaving turns.

For now though, unfortunately she has to be satisfied with a thorough, but only half done job…. And he can only hope her House Superiors will find it an adequate start…..