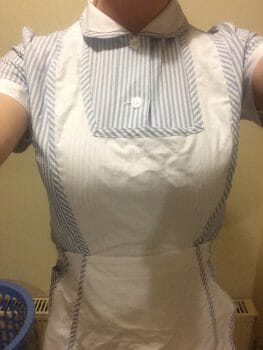 Today’s report is on an unexpected, but deeply appreciated, lesson on the Zen of Servitude. We begin with a little story:

This sissy’s housemate and close friend has been frightfully ill. Miss M was bedridden, as sometimes she sadly is. During these bout, Sissy kirsti will volunteer to take on any of her household duties or personal errands, and attempt to expedite her convalescence. On this particular occasion however, it had begun to drain her spirit.

kirsti ann’s witticisms and comedic jests fell unusually flat and no usual pick-me-up would suffice. Miss M, being an enthusiast (but until now non-involver) of Sissy kirsti’s submissive nature, gave her an idea…

One elaborate montage of face-painting, dressing and coiffing later, Housemaid kirsti ann was reporting for duty!

With a ruffle of petticoats and a playful bound, this sissy entered the boudoir, much to Miss M’s gleeful delight! She threw her hands up, brightly smiling and laughing cheerily away! It was as this sissy had thought, a pleasent surprise and an infectious chipperness seemed chase the malaise away!

This sissy spent the rest of the day tending to her every whim; a fresh drink or a cool flannel, an extra pillow or light snack. While Miss M still coughed or pain crossed her face, that inital bright smile remained.

As the day progressed, Miss M’s demeanour lightened further, indicated by her reciprocant playfulness and a desire for closeness. A gentle massage and manicure ,(putting this Sissy’s new found skills to practice!) was just what the doctor ordered.

“We should really give you a name…” said Miss M, as this sissy brushed her new Madame’s hair, “Have you ever thought of having a girly name?”

“I don’t mind, Miss!” this sissy said breathily, girlishly in character. “Someone once like to call me kirsti.”

“That’s a shame… I always liked the name fifi, kind of like a French maid!”, Miss M giggled!

Sissy kirsti was ordered to stand in front of her for inspection, and as if on queue, the radio tune changed; “Heh I’ve got it… you’re dismissed Maid keke!” Miss M announced, playfully swatting Sissy Kirs… Sissy Keke on the rear! “I need you well rested to look after me tomorrow!”.

With a curtsey and a smile, this newly dubbed sissy, bid her Madame goodnight.

Reflecting upon the whole experience, it was truly wonderful to see the joy and respite that an attentive sissy can bring. To be able to so gently tweak the dynamic of care and to see such brilliant returns. Serving one’s Madame proved, not only to be a humbling and emotionally rewarding venture, but also to be great fun!

Much like caring for anyone you love, be it a friend, a partner or a Mistress; being a sissy isn’t a job. Submissives like this sissy should never be cold like paid professionals.

Every sissy should deport themselves with grave and willing servitude, because they carry love. And everyone wants to see those that they love happy.

Just the one photo this sissy had time for, of her well worn uniform after a busy day!