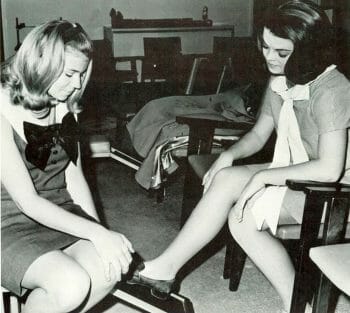 A respectful bow to the Superiors of the House of Sissify who may decide to spend some time on this report by sissy cecile.

This sissy was too meek to go out and shop for the attire that goes with doing her maid duties for the Mistress’ household. Instead, she tried to do her shopping online.

That seemed to work to a certain extent and a wardrobe started to form slowly and steadily. Truth to be told, many a time what sissy maid cecile ordered just was not right. Either it did not fit well, or it looked quite different than intended.

One time this happened to a pair of high heels that sissy maid cecile ordered for her house duties. While the size she ordered was what she was used to order, these heels just didn’t fit her ungirly sized feet. So, this sissy then pulled together all her courage and decided to visit the shop in person and ask for advice.

Careful to wear her garter belt with seamed stockings under her regular clothing, she then took the shoes in the box and in a clear shopping bag out on the street. After a nice walk and a brief hop by public transport, this sissy was sure that more than a few eyes were looking at the bright box that didn’t leave anything to imagination. Still she managed to reach the store and entered it in a dignified, yet slightly excited manner.

The store specializes in high heeled shoes and it had quite a few patrons browsing the wares. This sissy circulated politely, while waiting for a Shop Assistant to have time for her. She was startled when she heard a frail voice behind her, asking “How may I help you, young man?”. Turning around, this sissy saw an Aristocratic Woman who identified Herself as the Owner of the Store.

Gulping her excitement away, this sissy then introduced herself and described how she ordered a pair of high heels on the website of the store. While the service of the store was impeccable, the sissy must have made a mistake as the shoes that were delivered just did not fit her feet.

The Store Owner looked amused, rather than surprised, as if this might have occurred before. Immediately She advised this sissy to take a seat and to show Her the problem. Sissy thanked Her for the kind response and took the seat that was offered. She then took one of the shoes from the box and gave it to the Store Owner. While the Store Owner studied the model, this sissy undid her shoe lacings and removed her regular shoes.

The Store Owner noticed the stockinged feet of this sissy and gave her a compliment to come prepared to the store, as fitting Her shoes would require wearing pantyhose. She then gave this sissy another compliment for wearing seamed stockings, guessing these were not pantyhose but the gartered variant. With this sissy startled a bit by Her understanding, the Store Owner then asked what she was looking for.

This sissy confessed her love for a pair of shoes with heels of five inches, in patent leather, with an open toe and with a strap around her ankle. The Store Owner excused Herself for a moment, heading to the back of Her Store. This sissy noticed the glances of a few patrons and saw an approving nod of one of the Shop Assistants.

Just then the Store Owner returned with a couple of boxes. Undoing the cover with a grand gesture, she showed a perfect shoe to this sissy. Handing out both shoes to this sissy, the Store Owner insisted that she tried them on. With trembling hands this sissy accepted the shoes and tried them on, taking a brief moment to tie the straps around her ankles. The fit was perfect, and the shoes looked great on her feet.

The Store Owner then nudged this sissy to stand on her feet and to try a few steps on the new shoes. Feeling encouraged by the kind and professional Store Owner this sissy stood up and walked to a big mirror in the back of the store. Admiring how the shoes looked on her feet, she then headed back to where she was seated before. The shoes were indeed a great fit and the Store Owner was happy with the result as well.

Taking the shoes back from this sissy, the Store Owner then headed to Her register to administer swapping the wrong shoes for the right ones. Handing this sissy a new bag, with a big bright advertisement for Her store on it, She then wished her good luck and assured her that she would be welcome at any time in Her store.

With her head in the clouds this sissy made the journey back to her home and wondered what she had been scared of all that time before.