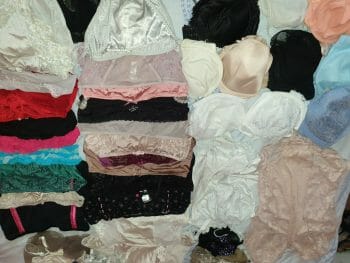 This sissy has read the ‘Zen of Servitude’ and finds it very comforting to know i am doing the right thing by being here with these lovely sissies and Mistresses.

This sissy has not smoked for over 20 years and s.he never chews gum ever. This sissy also likes to paint her nails when given the chance but must remove it before going to work. This sissy tries to think feminine thoughts throughout the day and helps he.r fellow female co- workers when ever s.he can.

This sissy always wears panties whenever s.he can and has quite a collection (see picture) which has been bought over the years. It also includes bra and pantie sets, suspender belts and bodies. sissy is very found of pantyhose and has drawers full of them. This sissy will wear he.r female clothes underneath and go out shopping.

This sissie has been wearing heels for a few years now and can walk run and curtsy in them. This sissy has learned how to sit and behave whilst wearing the shortest of skirts. Acting like a true female is this sissies goal in life and to serve Womankind and a Mistress is my function.

that’s a very impressive panty drawer natalie! what fun, thanks for sharing!

Thank you Madame Stewart for my new badge.
This sissy is so grateful for your time to look at my first try at a report.
Thank you so much Madame Stewart

While it seems you are quite the developed sissy – I hope you learned more than just the affirmation of your past knowledge. Next time, in your act of Service to the Feminine – focus on how you can better yourself with the teachings.