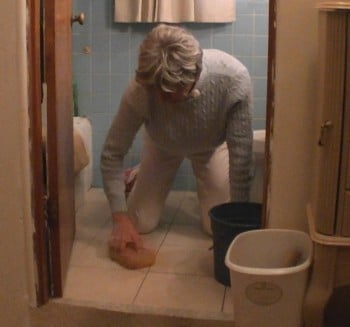 This sissy wishes to submit a report to the House Superiors. this report concerns sissy servitude, specifically Domestic Duties, the sissy job of fulfilling the needs of a sissy’s Mistress to have a neat, clean, presentable home.

For this sissy’s Mistress, sissy’s function divides into two, the inside and the outside, mimicking the organization of the House itself. sissy spends her time on the inside of the house in much the same way s.he spends her time very deep inside herself. doing her very best to be a gurl. this sissy prepares for her inside the house chores by getting dressed properly. sissy does not have a maid’s outfit ( 🙁 ). instead of a maid’s outfit, s.he wears appropriate casual, housekeeping clothes as a g girl would. leggings or nice girl jeans, with a nice femme t shirt or pullover sweater. something casual enough to take a little wear and tear, but also maintain the proper femme appearance. makeup and a nice hairdo are the final touches.

This is so important. even though sissy is doing manual labor, s.he wants the outside at least to come close to matching the femme spirit on h.er inside. s.he also wants Mistress to know that s.he is doing what s.he can to hide that masculine person, a masculine person that might take offense at the thought of doing housework and come bursting out at any second. the clothes are part of keeping that person under control.

The second prereq is attitude. sissy gets into a frame of mind that is eager and focused on making Mistress proud to be in Her home. sissy must regard household chores as sissy’s destiny and as consistent with h.er nature. so to keep that inner gurl radiating from inside to the outside, s.he must be a spirited little maid captivated by her work. s.he lets h.er Mistress know that sissy’s activities are totally consistent with what’s in h.er heart.

now for the work itself–it’s very simple. keep on schedule and the work is never overwhelming. sissy always dusts the whole house 3 times a week. sissy must mop and clean the whole bathroom 3 times per week. sissy cleans the bathroom sink every evening before retiring to bed. the carpet must be vacuumed twice per week. windows cleaned a couple of times a month. dishes done and kitchen counter swiped every evening. it’s never too much if a sissy is truly willing and allows that inner gurl to be in control.

sissy is also in control of the outside of the house. that is truly a problematic activity. the lawn, the painting and the maintenance are routine masculine tasks. sissy must do them and does do them all. when sissy is outdoors, s.he wear her boy outfits. they fit the work s.he is doing and present a masculine appearance to the outside world; but now the look is humiliating and to some extent the work itself is humiliating because the work and the look are inconsistent with what sissy feels on the inside. it is also inconsistent with the person that Mistress has encouraged and developed. yet the work must be done and Mistress wants it done so sissy does it.

once again, despite sissy’s best intentions, the task of being a sissy is always at bottom a hopeless endeavour. the tension created by the outside work brings the ultimate failure home to sissy’s mind. a sissy can never truly become fully feminine. so in spite of Mistresses smiles when sissy finishes and presents a nice home to Her, s.he remains a failure. sissy is destined to continue trying hard as possible to make a masculine outside conform to h.er feminine inside.

thank you to the House Superiors for reading this report.