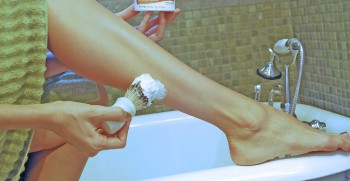 Shaving and being smooth is very feminine and also in my country reserved only for girls and women.
Because of still sunny and warm days this sissy wanted to wait until autumn to stay safe under long pants, but House spell and Assigment waiting in sluts inbox were stronger.

First this sissy wanted to admit that it is not he.r first shavin experience. This little plaything done it several times before and even once was waxed in spa resort also he.r pubic and clitty is permanent herless after laser treatment.

This time is much different. In any way different.
First it is done as a Assigment, second it will be judged by Staff (my beloved and supporting older Sister checked it already- sissy made it at Her home).
Sissy already read several Assigments about shaving to make it right.

So how it was all done…

Sissy went to he.r Sisters place (2h driving) with bag full of girly stuff. All the time tucked plugged and pantied which began to be he.r second nature.
Joanna (my Sister) let slut in and commanded to hurry with everything cause She wanted to go out later.
Sissy got undressed and leave only panties and plug. Joanna was very curious and wanted to see everything while checking House on tablet and earned sissy some Princess points. Sissy got tears in he.r eyes from humiliation and shaking hands.
Joanna found it. She grabbed slut by head looked in he.r eyes and asked yo calm down. She kissed sissy in fore head and said that She will not go any were today and stay with sissy to the end, especially that She started to have great fun.
Sissy took long hot bath and began to start shaving with he.r new pink razor.
Later sissys Sister came back to bathroom and sat on closed toilet wearing only thirt and Her ex boyfriend boxers. She giggled and said that now She is more man than Her sissy brother/sister.
After everything was done sissy cleaned Sisters bathroom while talking about different things.
Sissy discussed with he.r Sister details about next time and make some photos.
When living Joannas home slut asked Sister one more time not to talk about it with anyone especially my wife (they are friends and sissy met he.r wife for first time on Sisters graduation party).
Joanna turned mad for sissy and slapped he.r into face. She said that this sissy should know what True sister love is and it is very good that sissy joined The House so s.he can learn about it.

Sissy wants to apologise Madame rest of the Staff and all the sisters for such long story. It should be about shaving not sissys live, but this is my mental change and sissy felt to write about it.
This sissy is very happy now. Tucked plugged and pantied and now also smooth shaved. Sissy feels all of it in very sensual way. Starting to feel girly makes sissy happy, obedient even peeing is great adventure . Slut is very suprised how easy is going on. My Beloved Sister acceptation also gave sissy extra pair of wings to fly into feminization.