This morning katherine could not resist the urge to rid her body of ugly masculine hair any longer, she took out a new fresh razor blade and carefully foamed her sissy legs in the bath. and began to work up her sissy body. Once she started she could not stop as she had several long hairless patches on her body.

Katherine was shocked with how quickly and how much hair was coming of her body, and found it hard waiting to shower off and see how pretty she had become. She only cut herself a few times and found her toe hair a little stubborn. She strongly recommends to anyone to trim if it is their first time like mine as my sissy razor had to unblocked and cleaned many times.

Luckily katherine read the guide to shaving first and was careful behind the knees which took several minutes to complete, she found the whole process stimulating and her little clitty was a stone, but luckily it was her special day so any minor orgasm could be excused. 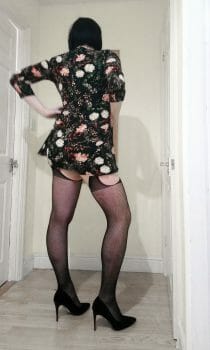 When this sissy finally got to her clitty she applied extra foam and was careful to go between her bum cheeks and over her sissy testicles, before the big moment of trying to sculpt herself a respectable pussy. katherine tried hard to make a respectable triangle, but she has fine pussy hair so it was not easy.

Finally when it was time to shower off, i felt a reborn sissy apart from a few minor cuts, katherine felt very sensual and sexy, her pussy triangle felt amazing and feminine and she loves it. She had no choice but to fully dress after and see her legs in stockings, she now just hates the idea it will grow back, but will keep it shaved forever

She would love to thank her Superiors for their guidance and encouragement.