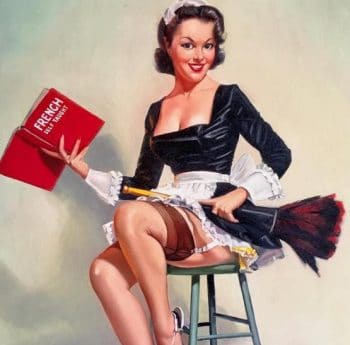 When sissy was told that Goddess Wife was having a day shopping at the coast with her friend, sissy decided to take a day off work to clean the house. She did not get these opportunities often and desperately wanted to make a special effort to please her Wife. So after driving Wife and her friend to the train station she drove home and changed. She did not have a maid uniform, but found a little frock and an apron. She also slipped on a pair of pink fluffy slippers. Finally sissy added a plug, improving her posture and adding more excitement to doing the chores.

After a small coffee break, sissy popped to the local shops to get a few things for evening meal, she was going to prepare a tapas and had been studying some recipes to try to make Wifes homecoming special. Sissy also picked up a little pot of pansies to put on the table. Those little flowers look so pretty and colourful.

Sissy prepared the tapas, Spanish omelette, chorizo in red wine, served with a tomato salad. Then with a last quick check around the house to see that everywhere was spotless, sissy went to collect the Ladies from the station, still wearing her frock. She carried both Ladies shopping bags and brought them home. Wife’s friend would stay for tea. Sissy was thrilled to have two Ladies to serve.

Wife and her friend sat at the table while sissy served them, curtseying as gracefully as she could manage (which was a little wobbly, but she did her best). She poured wine and sat quietly on the floor at Wife’s feet, gently massaging them, whilst listening attentively to the Ladies talking about their day. A good sissy should be seen and not heard unless directly spoken to. Their conversation is far more important than anything sissy has to say.

Wife occasionally held a morsel of food down letting sissy eat out of her hand and then petting her head. Sissy liked this and would kiss Wife’s hand in thanks. sissy is at her happiest when serving her Goddess. The House is helping her to fully realise this.

One final note she just must add…
Sissy was genuinely happy to cook for Goddess Wife. However, wife normally cooks most days and never makes a big deal of it. Sissy is in awe of her Superiors who just “get on with it.”

Thank you kindly for the badge Madame Steward, sissy will always try to be worthy of it and is humbly grateful for the training she receives in the house.

sissy is puzzled why her pictures fail to load into her reports and apologises. Next time she will ask a Superior to help her!

Wonderful application of the Assignment sweetie! – And what a realization that a Woman’s work never ends, huh?