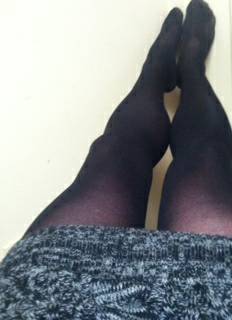 Sissy went the store and told the friendly sale clerk s.he was looking for a dress in this style. S.he picked out two nice sweater dresses and asked the clerk if it was the correct size for sissy. The clerk said “Why don’t you try them on in the dressing room?” So she went in front of me and picked out a changing room and put the dresses in there and said she would be back in minute.

Sissy took off top clothes and put the dress on. A few minutes later the clerk asked if she could come in and sissy could not say no, so open went the curtain and the sales lady came in. This sissy was standing there in my black tights, knee boots, panties and a new sweater dress, and very humiliated.

The clerk moved her hands over the dress and said it looked nice, and had a good contrast with the black tights. She said to try the other one on and she would be right back. The other dress had more blue in it and when the sale lady came back she was holding a package of navy blue opaque tights and fabric measuring tape. She said the dress also fits fine but would look better with navy blue tights and not black tights. She then asked sissy if s.he had been measured for a bra and this sissy said no. The clerk measured sissy’s chest and titties, you are a 42 “C” she said.

“Why don’t you change your tights and I will bring a bra to try on”, and then left the room.

I changed into the navy blue tights and put the dress on and it did look good. The clerk came back with two bras, and said to take the dress off. Sissy was left standing in navy blue tights, boots and her pin up panties. The sales lady held out the bra and had sissy put her arms in the strap hole and then fastened it in the back. She adjusted the ‘girls” a bit and side it fit fine, and me sissy try the other one on. It was more of a push up bra that gave sissy more girth in the chest. The sales lady then had this sissy put the dress back on and smoothed it out and said “you look good sweetie”.

She picked up the other dress and bra and grabbed my male clothes too and said I will meet you at the resister. I discovered that s.he would be wearing the dress outfit to the check out since my other clothes were gone with the clerk.

Sissy walked out of dressing room and heard the sales lady saying “over here sweetie I have your things ready”. With dress swishing, and my tights rubbing together and my heals clicking on the floor, sissy made her way to the register where all my clothes were folded and my new dress and bra were in a bag.

I paid for the items and the clerk said I look nice and that she had put my other tights in the bag as well. She mentioned that they are having a sale on panties and if sissy want some new ones. S.he said that s.he will be back another time.

Sissy left the store in dress, tights, panties and bra, with two big bags of clothes.

“Come back anytime sweetie” is what s.he, and other customers, heard on the way out.