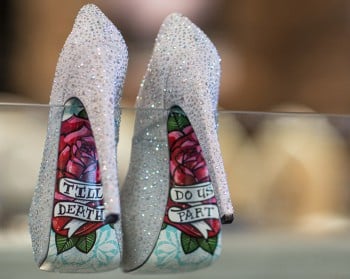 The life of a sissy is not meant for all. To give up your selfish desires and solely focus on enriching the lives of Women takes a lot of willpower and awareness. It is difficult to separate the life you have lived up until this point. This sissy appreciates this assignment because this sissy has tried to do as much of the teachings in the lesson to this date.

This sissy has been living in a Dominant/submissive relationship for the past 5 years. My Superior is my loving Fiancée and She has been guiding me to be the best submissive this sissy can be. This sissy’s daily routine is around making this sissy’s Mistress happy. This sissy, on a daily bases, does her best to make Her life easier. As this assignment requires, this sissy naturally takes on roles to cook and clean Mistress’s home, occasionally She requires me to bath her upon request; this sissy has even been a footstool for Mistress while She shaved in the shower. Daily, when the night is winding down, Mistress commands this sissy to massage her shoulders. Occasionally She requires a full body which this sissy jumps at the opportunity. The thought of this sissy running her hands down Mistress’s legs and back makes this sissy fantasize about having Her womanly figure one day. On the occasions where Mistress and this sissy host friends and family, we both take roles of hostess. This sissy is not public with her desires to be a sissy, other than with Mistress.

This sissy also enjoys, more than anything else, providing Mistress pleasure with my tongue. This sissy has enjoyed regular sexual interactions with Mistress before but the idea of lick Her most intimate area is something this sissy craves on a daily basis and is the preferred sexual encounter for both Her and this sissy.

In terms of keeping up appearances, Mistress and this sissy have been practicing similar etiquette standards as a Dominant/submissive. After reading this assignment, it is clear that submitting to the House that this sissy has some work to do to keep the appearance of being a proper sissy. This sissy has very recently been comfortable with herself enough to discuss with Mistress the desire to be a sissy. Together, Mistress and this sissy have begun to change some of the physical behaviors as well as emotional behaviors. The chart displaying the qualities that need be eradicated and adopted are this sissy’s most important take always from this lesson. To look like a woman is one thing. But, to think and feel as a true sissy submissive is my life goal. Passiveness, emotionally expressive and smoothing my currently personality is what this sissy sees as some of the hardest things to achieve and it will take the willpower and awareness of how this sissy acts currently to affectively change.

In terms of physically becoming more womanly, this sissy is as far from a real sissy as possible. This sissy is very new to even thinking about being a sissy. Walking, kneeling and sitting will be challenging. However, now that this sissy is committed to being a sissy, my goals are to embrace the posture and demeanor of a strong, sexual woman.

To achieve all of my goals and be the best sissy possible, this sissy has been studying how women around me handle themselves out in the world and at home. This sissy wants to begin to ask deeper questions to the women around me that this sissy trusts in order to change this sissy perception of what it means to be a woman. This sissy only has a fantastical idea of what it means to be womanly, but now that this sissy has accepted who she really is, this sissy wants nothing more than to be an obedient, loving, affectionate, soft sissy.

Redemption of the Day:
This morning, this sissy made Mistress breakfast while She showered. This drove Mistress to work and will be pick Her up later this afternoon. This sissy is also cleaning Her apartment while She is at work. This sissy currently has some time off from work so it is this sissy’s duty to maintain Her home. Today, this sissy is not cooking dinner because of the amount of leftovers we have so this sissy will have to find another to pleasure Mistress.

you sound so sweet and submissive dear! It really was a fascinating assignment and *blushes* so good with words, felicity likes how much sweetie put in to write this xx