Less is More
This fountain of insight was both an eye-opener and an affirmation of the enlightened guidance this sissy has sought to date. These days, sissy francine’s performance of this vital service is in light of Lady Amanda’s discovery that Her sissy spouse is far from being the only satisfactory provider. Whilst, in Her boudoir, Lady Amanda’s provision of cunnilingus may be the concern of others, there are still times sissy francine is called upon. Such moments may be infrequent and spontaneous but, when summoned, this sissy’s heart pounds like a drum. The intensity of feeling, when encountering this uncommon prospect, is deeper, by far, than the mundane ecstasy of everyday indulgence. Sporadic as Lady Amanda’s invitations may be, a pattern has begun to emerge. It is not without note that there are one or two distinct moments in the day when Lady Amanda is most likely to invite Her sissy to pander to Her desires. 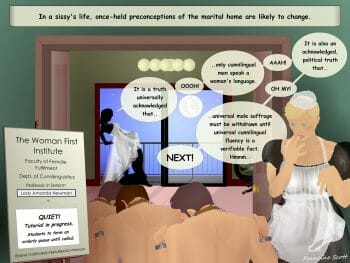 Hope and Worthlessness
Serving morning coffee in Lady Amanda’s study is always an auspicious moment for Her hopeful sissy. For some reason, this is especially so if Lady Amanda is at Her desk, in the middle of a phone call. The accompanying, widening horizon of Her rising dress hem, with the quarter turn of Her swivel chair, is all the body language Lady Amanda need employ to convey Her desires. It commands an immediate response from Her sissy to fall to he.r knees, surrendering to the irrefutable truth that he.r only permissible ascent to heaven is to be found within the heavenly constraints of he.r Mistress’s dress lining. Rarely is a sissy so aware of he.r path to transcendence and how much upon it he.r sissy sense of self worth depends. As he.r Mistress enjoys Her coffee-time chat on the phone, from within Her skirts, a sissy must handle he.r ascent with delicacy, knowing to allow he.r hands only the lightest touch of he.r Mistress’s nylon stockings. A sissy also knows not to paw and never to grasp, almost to go unnoticed yet unmistakably discernible. The infinite care of he.r approach allows a sissy to appreciate that there is nothing s.he could desire beyond the skirted realm of this silken veil. A sissy’s only awareness of beyond may be of he.r Mistress’s half of a phone conversation.

The Ethics of Panty Removal
Properly tucked throughout, lost in the ecstasy of the inner world beneath he.r Mistress’s dress, a sissy can appreciate fully the complete and utter objectification of he.r very being. Normally the preserve of invited lovers, being summoned to this magical realm is an exceptional opportunity for sissy francine to experience the honor of removing he.r Mistress’s panties. A task, normally reserved for others, it is an undertaking to be executed with the greatest of care and delicacy.

Hope and Countenance
The other occasion of daily note, when Lady Amanda is more likely to wish for the diligent lips and dutiful tongue of Her sissy maid, is late afternoon/early evening, in the drawing room. As custom would have it, this is often a time for afternoon drinks, before Lady Amanda bathes and gets ready for a night out. When serving drinks, this sissy is ever hopeful of finding he.r Mistress, standing by the fire. This can be a promising sign of Lady Amanda’s mood for cunnilingual frolics to accompany the quaffing of chilled Cava. At times like these, a sissy needs strength, endurance and the consummate ability to pleasure he.r Mistress as though he.r worthless life depended on it. When standing, Lady Amanda can be most forthright with Her demands, fucking Her sissy’s face with impunity.

Ever Ready
The sporadic and unpredictable nature of Lady Amanda’s whimsical notions for clitoral arousal means that this sissy must be ever ready with he.r preparations. Every room in the house is spotless at all times. However arduous he.r chores, this sissy’s standards of appearance and cleanliness must be impeccable. Attention to detail throughout is everything, scrubbing hands, reapplying make up, mending nails and constantly grooming. Whilst this sissy often enjoys the privilege of assisting he.r Mistress bathe, exfoliate, moisturize and dress, this is, more often than not, in preparation for assignations with impressively endowed, real men.

Leave No Trace
The occasions this sissy is blessed with the honor of pleasuring he.r Mistress tend to be spontaneous, when he.r Mistress is dressed. This, however, does not negate a sissy from he.r need to prepare. When, for example, serving morning coffee in he.r Mistress’s study, this sissy makes a point of having cleansing wipes to hand, along with talcum powder and a change of panties. However unlikely their requirement, they allow this sissy to attend to her Mistress’s post-orgasmic needs. Only when he.r Mistress has been meticulously cleansed and Her sissy has assisted putting on Her fresh, talcum-lined panties, may this sissy then straighten Her Ladyship’s dress. And, only then, may this sissy be dismissed to leave he.r sexually satiated Mistress in peace to continue with Her work, as if Her sissy had never been to attend to Her.

Elusive Grape
This sissy found grape peeling something of a challenge and a sharp reminder of how out of condition he.r oral muscles are. It is, however, obviously the perfect exercise to be more proactive and hard working with the provision of cunnilingus. Lady Amanda has now got Her sissy on five a day of observable peelings to get Her sissy in shape and optimally tuned for pleasure. It seems nigh on impossible, so far, to peel a grape without damaging the interior and releasing the juices. Not wishing to whine but Lady Amanda’s choice of grape (Sable) is an exceptionally soft, juicy variety. In he.r favor, as a breast-fed baby, this sissy’s ability to roll he.r tongue is strong. Five grapes a day, however, have highlighted the importance of a powerful, supple jaw that can stretch lips in ways this negligent sissy never thought possible. Without doubt, it is a test of patience and endurance. Grape peeling skills have improved vastly whilst jaw is gradually aching less. This sissy is benefiting immeasurably from this regime, especially when it comes to Lady Amanda’s proclivity for vigorous face fucking to accompany pre-bathing aperitifs by the drawing room fire.

Under Pressure
Barely discernible kisses and licks around the labia and over the clitoris is how this sissy’s Mistress likes proceedings to begin. Judgement of how much tongue pressure to apply next is an art. If in doubt, this sissy tends to leave it to he.r Mistress to inform Her sissy to get a move on.

Beside Herself
The House has provided step by step instructions that virtually match to perfection Lady Amanda’s personal preferences. When Her sissy purses he.r lips to suck gently on he.r Mistress’s engorged clitoris, pulling it into he.r mouth briefly and letting it go, Lady Amanda gets so beside Herself that, for the briefest of moments, the power dynamics of the relationship between a Mistress and Her sissy seem to alter.

Please?
Commanding as Lady Amanda can be, She has been known to utter the word “please” from time to time. The advice of the House, stating what to do when a sissy’s Mistress starts bucking up against Her sissy’s mouth and gasping in ragged breaths, is invaluable. Not to use this opportunity to try something different is wise counsel. Heaven help the sissy who fails to continue doing exactly what s.he is doing.

Viola Concerto
Of all the wonderful finger work the House recommends, a particular favorite of Lady Amanda’s is the ‘viola’. The giving nature of this style, encompassing, in unison, Her Ladyship’s vagina, ‘g’ spot, clitoris and clitoral shaft can stimulate a dramatic response. As an interlude to the ecstatic rapture of Her sissy’s viola concerto, Her Ladyship has a penchant for a vigorous anus-to-clitoris tongue lashing before the concerto reprise, once more.

Slave to the Rhythm
If this sissy has executed he.r cunnilingual duties with virtuoso gusto and the first signs of an approaching climax can be sensed, few things please Lady Amanda more than the timely and gentle, anal intrusion of Her sissy’s finger. The crescendo of this cunnilingual symphony is a vital moment for a sissy to appreciate he.r entire self worthlessness. However beyond the abyss of discomfort, neck ache and outright pain a sissy may find he.rself, s.he must perform with the ease of a virtuoso. In the event of he.r Mistress bouncing off Her sissy’s face like a jackhammer, a sissy’s only worth is to be found in he.r ability to take the blows and never lose the rhythm.

Anal Work
Quite apart from Lady Amanda’s occasional desire to rest Her vulva on Her sissy’s face and dip Her clitoris into he.r mouth, Her Ladyship is also partial to deep and meaningful ass kissing. Again, subject to he.r Mistress’s whims, a sissy may be called upon at any time to perform this most intimate act of worship and unconditional adulation. As much as exfoliation and back scrubbing, ass kissing forms an integral part of Lady Amanda’s assisted bathing regime. Enjoyable as Her Ladyship finds discovering just how much of Her sissy’s face She can consume within Her buttocks, it is noteworthy that, when bathing prior to a romantic assignation, Lady Amanda is inclined to be most inquisitive. To satisfy Her Ladyship’s curiosity and demands for feedback, Her sissy’s ass-kissing talents need to continue flawlessly whilst giving honest answers to the questions that concern he.r Mistress. Assurances of deeply inspected cleanliness, freshness and olfactory heavenliness are sought before bathroom ablutions are over.

In the Service of Womankind
On nights like these, before departing for Her date with love, in addition to Her sissy straightening he.r Mistress’s stockings and dress, it is not unknown for Lady Amanda to have Her sissy smell Her Ladyship’s breath for freshness. Likewise and lastly, before departing, Lady Amanda will turn towards the door and have Her sissy kneel to draw down he.r Mistress’s panties and sniff, with deep inhalation, for one last check for freshness, before drawing up he.r Mistress’s panties once more. With Her dress straightened and best foot forward, without turning back, Lady Amanda is finally ready to step out, upon an odyssey Her sissy can only imagine. If fortunate, upon he.r Mistress’s homecoming, this sissy might be of some service. In the meantime, it is for this sissy to cease he.r drooling, freshen up, change he.r panties and put aside any thoughts of when he.r next Special Day is due. It is time to repeat the mantra that s.he is merely a lowly sissy maid in training, whose whole existence is to serve Womankind with complete subservience.