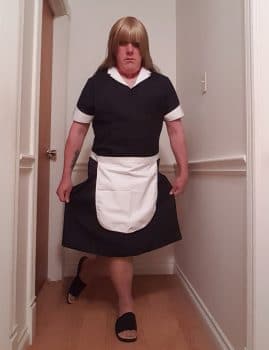 The concept of the sissy being solely for the pleasure of the Superior, while being easy to fathom, was long lost on this g.rl. For many long years she viewed herself as a crossdresser, and the clothing and other aspects of Femininity as masturbatory in nature. Thus she long in her willful and self centered nature, believed those objects and even the Dominants involvement existed solely for her pleasure. And therefore she used Them as such. This sissy had loved accepting the attention of a Dominant on her terms. Even shamefully at times dressing as a Woman without the proper attitude and in that way mocking the Superior Sex instead of taking the attitude of a humble acolyte.

It took many years and hard lessons to break this g.rl of those bad habits. This girl keeps first and foremost in her mind that her pleasure is meaningless. she, as a sissy exists to provide her Dominant ultimate pleasure,, in any matter He or She sees fit.

It took many years to overcome her stubborn male attitudes and attune her mind more closely to Female. And especially to overcome being submissive and girlie amongst Real Men.

As a sissy, this g.rls sexual preference is meaningless to her ability to please her Dominant. As a good sissy, this girl now realizes she must be ready and able and more than willing to serve a Real Man Dominant with as much skill and enthusiasm as she would serving a Mistress or Female Dominant. Sexual preference to a sissy must be irrelevant, as the pleasure derived is ultimately for the Dom.

It is a lesson this sissy shall never forget.

In most humble and grateful submission,

svetlana thought this report was very good to, s.he was looking for your correspondence etiquette report having seen you been awarded the badge, its fun to note the style and detail of the correspondence, its fun to master and svetlana likes to expand he.r knowledge of it, and also be able to practice it more often, so is finding this subject very interesting. svetlana is sure Madame Stewart will keep us all on our toes.

this sissy loved this report. Recognizing ones only purpose is to service for Another’s pleasure. That service is whatever the Superior wants. Lana, you have “broken the code”. jimmie

Oh lanna! If only all the girls had this realization, or will have this epiphany soon! This is how a girl finds her Mistress. This is how it’s done. If a girl is too self centered, there is no way in Goddesses Green Earth a Superior will want to indulge their fantasies! Great report!