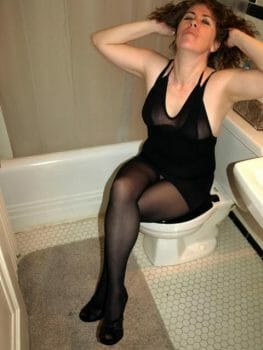 This sissy just loves her powder room. When this sissy was a young Mother would take me everywhere. My mother was a single mother and needed to bring me with her everywhere she needed to be. This also meant the powder rooms. As this sissy looks back, this habit was a factor in this sissies need to be as girly as possible. Oh this sissy remembers those days of going out and shopping then stopping for a meal. Even at that tender age this sissy was being feminized. Mother saw to that. Oh there were many factors to this sissy’s outcome but there not a doubt in this sissy’s mind that our trips to the shops had been this sissy’s foundation.

There was a shop that had a particular spot in the mind of this sissy. It was not the clothes or the food or even the service, but rather the lounge. It is a little strange but this sissy went to schools and libraries and other such institutions where public rest rooms. The “little boy’s room” was a filthy smelly place where awful things had been written on the walls, and there was paper on the floors, with dirt and God know’s what smeared on the mirrors. However, the shop in this little sissy’s past was a place that will be in this sissy’s mind.

The lounge was actually two connecting rooms. The first was a room that was sweet smelling with wall to wall avocado green sag carpet, (it was the seventies{blush}). It had a davenport with a matching auto-min on one wall and a long six inch wide table on the other. The table had a big long mirror and several plush stools that one may move about at will. The second room was the “powder room” where only superior women went and this sissy was could not. What this sissy noticed was that it was neat. What this sissy means is that in those days one was allowed to smoke indoors but the room smelled like “White Bride” (a perfume). There were ash trays but the were spotless and the stools could be moved around but stayed under the table and out of the way. The superior women would enter the lounge and sit (maybe smoke) and gab about the things on their minds. It did not matter if they knew each other but most of the time they would enter in two’s or three’s. One would throw a quick glace in the mirror to make sure that things were in there proper place and if anything was out of order the superior woman would pull out a chair to correct the problem, then would go into the powder room to take care of business.

This was a first glance into a world that this sissy will envy for years. Even now when this sissy got a new place it had to have a bedroom with it’s own private bath and ca-mode where this sissy can sit and do her thing. As this sissy dose a little tinkle, this sissy looks into the great big big mirror and thinks little sissy thoughts.

Love this report. katie does the same when she sits down like a good little girl, she thinks sissy thoughts.

What a great report, thanks for sharing!