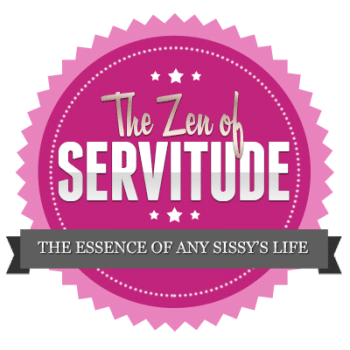 sissy tracy is new to Sissify.com and was given some initial assignments. One of them was to read The Zen of Servitude Assignment and explain this sissy’s understanding of what is expected as a submissive sissy.

While this sissy does not currently have a Mistress to serve, reading this article has definitely given this sissy a path of what can be done during everyday life. This Assignment has reinforced that it’s not just the particular Superior Woman that you are serving, it’s about making sure *all* Women are treated with highest respect and worship.

There could always be a chance that a Superior Woman picks up on a random moment of my respect and praise, realizes that this sissy might be good for other things, and decides to take this little girl under Her wing to mold as She sees fit. Sissy must always be ready for that moment by treating *all* women with respect and gratitude.

This sissy has learned that servitude and submission are natural occurrences and emotions that do not, and should not, be “turned” on and off.

Since this sissy does not have a Dominant Superior Woman to serve, in order to take on the “annihilation of thoughts” process, sissy has started listening to hypno-therapy tapes that firmly let the listener know of their submissive position and weakness in the presence of women (at any and all times).

This sissy has also taken the step to remove all male underwear from he dresser. Now, all that this little girl can put on in the morning are panties (g-string and thong panties in the case of this sissy).

It is stated in “The Zen of Servitude” that a good sissy must practice proper posture. This sissy has always had a difficult time with proper, erect, posture so a posture collar has been ordered to remedy this problem. Sissy will videotape herself walking in order to critique and improve the girlish appearance.

sissy has read a lot of feminine literature in the past and continues to do so in order to understand that Women are the dominant gender in this society. Currently, sissy’s favorite book has been “NP” by Banana Yoshimoto for a long long time.

Thank You for letting this sissy work on this report. If the reader(s) feel that sissy tracy should expand more on a certain section, sissy would be happy to oblige.