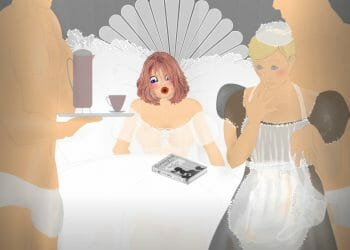 The Zen of Servitude strikes a familiar chord for a sissy who has long striven to nurture this state of mind at all times. Servitude is an art whose work is never done. Every day of a sissy’s life is an opportunity to refine he.r craft. However long he.r service, a sissy can always do better. It is the sole purpose of he.r life.

Even, in the most macho of work environments, rife with aggression, stoicism and self-centeredness, this sissy has avoided the temptation to be brutish, retaining he.r passivity, emotional expression, self effacement, giving nature, reliance and obedience, staying soft and smooth throughout.

Keeping up appearances is a vital fundamental for any sissy worth he.r sugar and spice and all things nice. Wearing women’s clothing is the most natural way to nurture the subjugation of he.r psyche and body to present an impeccable sissy demeanor at all times. Attention to detail is crucial. When it comes to appearance, a sissy must be beyond reproach. A daily ritual of waxing, bathing, exfoliation, moisturizing and nail care is mandatory. The gentle art of dressing is perfect preparation for a sissy to appreciate the finer aspects of a feminine nature, an absolute requirement in he.r approach to work. The gentle handling of feminine frippery is ideal for teaching a sissy that a bombastic, clumsy, approach to any task is a lost cause. Fastening the hooks and eyes of a bra and garter belt demands patience and care. Fingers need to be graceful and nimble to secure nylon stockings to garter clips. The flimsy nature of women’s panties is a constant reminder to the wearer of he.r vulnerable exposure to the world. In he.r dress, a sissy knows that care must be taken to retain modesty and avoid creasing. The skilled application of make up is evidence of a sissy not afraid to look he.r self in the face and take on board he.r responsibility to be pretty. Stiletto heels make for the best governess a sissy could wish for, teaching he.r that the masculine propensity to stride, stomp, stamp, jump, rush, charge, hurtle, run or scamper is, quite simply, out of the question. Carefully planned, graceful steps are required at all times. With every move s.he makes, elegance and purpose will be demanded of a sissy’s gait. A well-practiced curtsy is the mark of a sissy. Naturally, it is second nature for this sissy to curtsy before speaking. Upon dismissal from the room, this sissy never forgets to depart with backwards steps after the deepest of curtsies.

Never, never, never or ever, ever, ever would this sissy be discovered not wearing the prettiest panties. No doubt, should s.he be in an accident, he.r choice of lingerie will be a source of some mirth to paramedics and hospital staff. When at work, beneath a fragile, masculine disguise, the bewitching feel of a sissy’s delicate, silk panties is a constant reminder of who and what s.he really is.

Always aware that striding is for men worthy of he.r wanton attentions, this sissy always endeavors to keep the expectation of he.r stride low. It is such a revelation when life is approached with small steps. With the samba swaying hemline of he.r skirt, this sissy is learning to glide.

As a weak-kneed sissy of a certain age, this sissy confesses s.he has some work to do to achieve acceptable standards of graceful kneeling. A vigorous exercise regime is already in place and being adhered to. With random inspections of demonstrable improvements of grace, this sissy seeks hard to do better. Sitting is a deliberately executed act for this sissy, adhering at all times to the edicts laid down by the Zen of Servitude.

What he.r Mistress wants from Her sissy is foremost on this sissy’s mind, every moment of the day. Not an especially violent woman, this sissy’s Mistress likes to administer corporal punishment, usually to relieve the stress of dealing with the daily misogyny and toxic masculinity every woman encounters. After a particularly difficult day, to relieve Her vexation, this sissy’s Mistress will occasionally let go of Her frustrations by administering the soundest of bare-bottom spankings. At these times, Her proclamation to thrash Her sissy, to within an inch of he.r life, often becomes a procrastination over what constitutes an inch of a sissy’s life. Such deliberations can be a cruel tease for an anguished sissy but, in he.r suffering, it is a comfort to a sissy to know that he.r divine torment has been endured by others, greater than s.he, who have been persecuted and tortured for the sins of man. For he.r Mistress, this exercise is a profound mood improver. S.he likes to call these sessions Her aggression release therapy. Whether jesting or otherwise, Her latest suggestion that these sessions could become group therapy are leaving this sissy weak at the knees. Further threats to make a Girls’ Night of it make the heart pound, the mouth dry and panties moist.

By far, he.r Mistress’s most effective punishment is the overt flirtation of Her freedom to seek romance and sexual gratification from others. Over the years, a sissy’s exclusion from such ecstasies has been a source of pained jealousy and uninvited arousal. A sissy learns to be less unwelcoming of the arousal.

A sissy’s quest to think, feel and be like a woman, will help he.r behave appropriately to he.r natural Superiors and improve he.r chances of an ego-free understanding of what a woman wants.

As this sissy submits he.r report to the House, sh.e is delighted to discover that today is this he.r long-awaited, first Approved Masturbation Day. Rest assured, when chores are complete, this sissy will seek to be excused to indulge in the interfering intrusion of the otherwise hands-free environment, beneath he.r petticoats. Needless to say, it is going to be the most explosive, panty-wetting, forefinger-and-thumb wank of he.r life, after which, s.he will drink he.r panties dry. The prospect of multiple orgasms makes it prudent to have a clutch of fresh, silk panties to hand, all of which serve to capture all girly discharge to be licked clean. It is with some certainty, that right up to the midnight hour of he.r Special Day, long after s.he has gone to bed in he.r silk nightdress, this sissy will still be oozing with desire.

If the House Staff will forgive an excitable sissy this rambling distraction of he.r good news, s.he does so in the full knowledge that s.he is maidservant in he.r Mistress’s household and, as such, this sissy never misses an opportunity to serve a woman daily. Placing Her needs above he.r own, this sissy seeks to identify a singular act, every day, that will further define he.r self to be the sissy servant s.he is, both at home and at the world at large. This sissy’s mantra is ‘Women come first!’