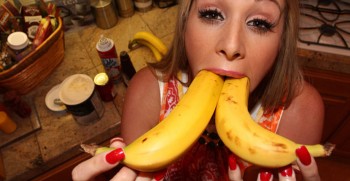 One of a sissy’s duties is to learn to pleasure a man sucking his cock skillfully and submissively. This sissy had the opportunity to meet a Real Man again this afternoon. she began by taking a nice bath and shaving her legs so they would be smooth as silk in her stockings. After that she put on her tight highs, garter belt, panties, bra and a sexy cute pink babydoll type dress that didn’t even cover all the way below her bottom. then she donned her so cute pink heels for after all a girl needs to coordinate her colors. anxiously awaiting the arrival of her Man she busied herself getting lighting right and pulling back the bed sheets for after all its the sissy’s responsibility and shouldn’t bother the Man with such a task. When the Man arrived she opened the door and he came in, complimenting this sissy by telling her she was looking very good. Sissy then turned around and led him back to bedroom with him rubbing her ass most of the way ,sissy was so excited. he proceeded to remove his pants and laid down sideways on the bed with his legs hanging off the side,sissy then slowly removed his underwear and took her place on her knees at side of the bed . then this sissy started a slow licking and sucking of his balls and licking upand down the shaft of his wonderful cock. After some 15 minutes or so of licking, kissing, and fondling his manhood it was nicely hardened for this sissy. he then told this sissy she could start worshipping his cock, sissy obeyed immediately and started licking and sucking the head of his cock while fondling his full balls at same time, Lots of sucking licking and stimulating his cock and balls later he directed this sissy to take the cock deeper into her mouth until finally she was taking it all the way in her throat. He told the sissy to take it all the way several times and when it was buried into sissy’s throat a few minutes later he xploded his precious cum right down this sissy’s throat. When sissy pulled off of the cock there wasn’t a drop missed and she continued to suck it for him and got one more good spurt of his delicious warm cum. Sissy then took a washcloth and wiped and cleaned the wonderful cock that just occupied her mouth. after getting dressed without much ado he headed for the door telling sissy to keep in touch that we could make this a weekly thing. Sissy replied she would and closed the door feeling very submissive as he had arrived directed sissy on what he wanted and then promptly left without any small talk, sissy felt very much like a slutty submissive as he came by got his cock sucked and left, with sissy feeling like she definitely was put in her place and affirmed her stature as a submissive sissy cocksucker.