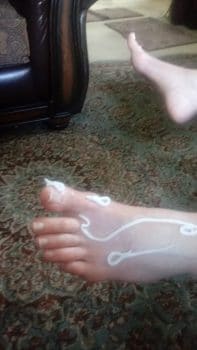 First please allow this sissy to thank All Staff at the House of Sissify for the opportunity and Honor to submit this report.

This sissy has been granted the privilege of kneeling at the feet of Her Superior and giving a pedicure. terrina’s Superior Wife could have easily gone to a salon but has trusted this sissy over anyone else. this House of Sissify sissy is under the guidance and control of The House of Sissify Staff.

terrina first prepares he.rself by taking care of personal appearance by insuring that he.r panties are as feminine as possible, usually bright pink to allow he.r mind set to be adjusted as to he.r duties at hand.

terrina’s Superior loves the fact that this sissy is willing to due such a demeaning task, as none of our friends husbands would ever due this for their Wives, but as a sissy terrina is overjoyed and always looks forward to serving. terrina starts by massaging Superiors feet while closely inspecting each toenail in preparation of pedicure. terrina’s Superior Wife has very sensitive feet and so terrina must be extremely careful while clipping and fileing. Toenails can’t be clipped to close and terrina is only allowed to file in a single stroke downwards on each toe. No nail polish was to be used this time , so terrina washed Superiors feet one at a time with warm soapy water and soft washcloth, after thoroughly tending to the cleaning by working between each toe. Then terrina used a warm towel to rap each foot and massage them as the warmth helps Superior Wife feel like the Goddess She is to this sissy. She tells sissy how lucky She is to have a man like me. sissy terrina is the one who is lucky to be under the Authority of The House of Sissify, and have a Superior to care for.