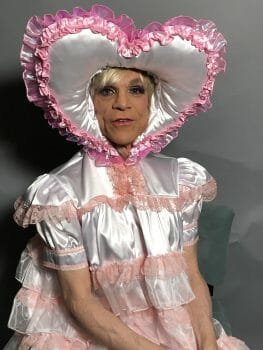 Curtsy and humility for allowing this sissy to address You and for Your time in considering its submission.
For this sissy, “Spring from Head to Toe” has been in the fall. In the last two years this sissy has taken the fall as the “special occasion- time to put on a new dress, gloves, a hat” encouraged by the House, for “sissies should be the ones in girdles, corsets, gloves (which make the hands look so elegant), and YES, Easter bonnets. Sissy clothing should have all the frills upon it!” sissy is already looking forward to fall 2019. It is expanding upon the House’s Spring from Head to Toe encouragement to dedicate at least a day, though for 2019 it is planning a weekend, for sissy celebration with a new outfit and a spa trip.

In Fall 2017, sissy found online a nearby salon that advertised a whole range of services for transgender/cross dressing individuals such as makeup, makeover and wig services, vocal training, mannerism/movement training, and fashion/style selection. This fall, fondly remembering its trip the previous fall for a makeover and wig purchase, sissy scheduled a makeover and wig sizing followed by sissy’s first photoshoot. Immediately prior to the photoshoot, sissy had a manicure/pedicure at a spa Nicole, the salon owner, recommended.

The photoshoot package allowed sissy to pose in three outfits along with wearing two wigs. sissy spent a lot of time choosing its outfits. A maid’s outfit was an easy first choice for sissy. The second choice sissy came to was a baby dress and bonnet. The House asked sissy in this assignment to “show a commitment to high style and servitude but to embrace the fashion of a time when protocol and good behavior were expected from the feminine.” The maid’s dress, along with all the details and accessories sissy assembled which sissy will describe, is consistent with this directive, as is the elegant and stylized baby dress and bonnet that sissy would happily be able to wear at an Easter tea party for sissies.

For its dress, sissy selected a high collar satin pink French maid’s dress. The dress came with a petticoat and with a pinafore. sissy also had intended pink opera gloves for the outfit but lost the gloves in a hectic time-scramble period immediately before the photoshoot. For undergarments, sissy chose a matching set of pink satin panties, stockings and garter belt. sissy wore white stockings, which matched the white petticoat and the white pinafore against the pink of the rest of the outfit, including sissy’s pink 5” heel maid’s shoes. sissy also wore a three-inch pink satin collar, with medallions saying “cumslut” and “bbc.” sissy attached a ten foot pink lacey leash with jingly bells to its collar. sissy had its make up done to match the pink and fun nature of the costume. sissy’s hair was a long blond wig in double ponies. sissy’s earrings were silver, the word “slut.”

The Easter dress came with a built-in bonnet sissy thought would frame its face well for a photoshoot. The dress is a delightful layered, lacey dress that looks like a yummy cake to sissy. To accompany this outfit, sissy wore diapers and a pink diaper.

As the House noted in the assignment, there is a “weeping for those days gone by” aspect to this sissy’s love of sissy fashion, and the maid’s dress and adult baby dress and roleplay accessories certainly bring sissy to imagine the birth and purpose of its sissy self and celebrate in a fun and grateful manner, by dressing in an outfit honoring servitude and in a pretty dress and bonnet for Madame Stewart and House Superiors.

In gratitude and submission, 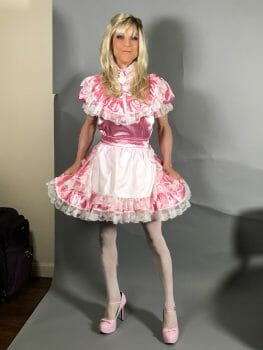 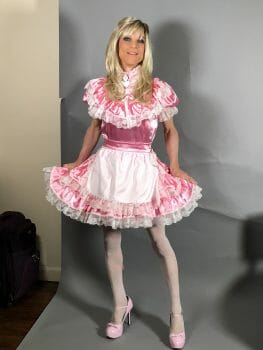 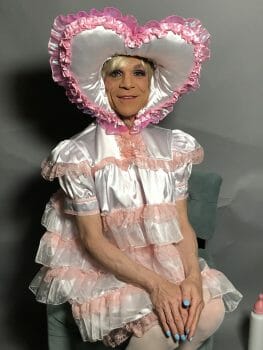 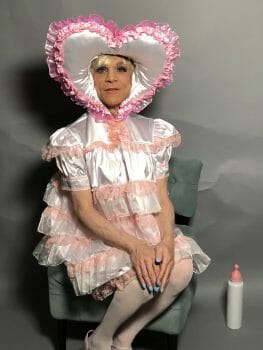 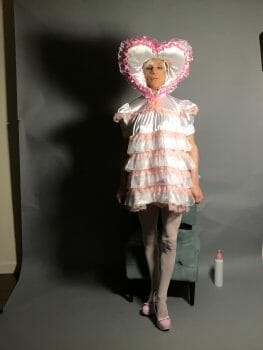 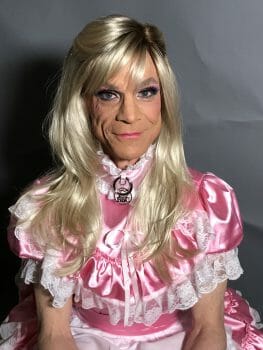 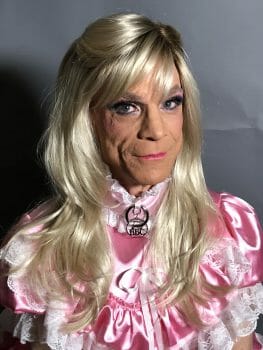 How precious! I think it’s funny that you changed the Spring to Fall, submitted the report in the Winter, and now Spring is coming! I look forward to you being a poster sissy for Easter!