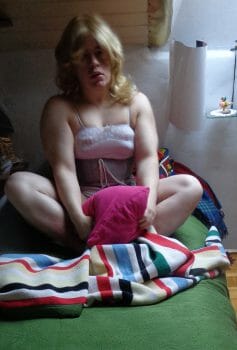 Fourth visit from the Aunt Flo came in perfect time. This sissy was recently rightfully punished for h.er misbehavior in the House and s.he was also under influence of burden from h.er environment. Hard time become even harder and it was good. Thank You so very much for Your wisdom and guidance.

This menstrual period came earliest in month so far and in that sense it surprised this sissy. s.he had everything required for it and noticed Aunt Flo arrival before the dawn during h.er morning pampering ritual. Before it, for a few days s.he was in difficult mood with heavy thoughts about h.er sissy nature, servitude and whole life situation. Seeing that note from the House about Aunt Flo really came in very good moment to cheer h.er up and bring feeling that s.he is not so much alone. s.he was really happy that new menstrual period as symbol of belonging somewhere will start and didn’t mind the difficulties it will bring.

s.he took tight bra, appropriate panties and sanitary pad and finished with skin care and exercise.
Than s.he opened instructions from the House and got surprised with requirement to stay at home first
day and concentrate on period sensations and girlishness. Also it was required to eat a cake at once on third day. s.he was afraid of eating whole cake since it was guaranteed problems and turning of course in work on “Figure Training” assignment. There is no point to worry in advance so s.he just dived in menstrual period. This time Aunt Flo came in silent time at work so it was not much of a problem to take day off. s.he started with suppository early in the morning with decision to more or less don’t eat at all in first two days in order to amortize incoming extensive calories from cake on third day.
As part of staying at home it was required to be in bad and watch soaps s.he doesn’t watch TV at all and don’t own TV for many years. Very rarely s.he see some movie trough internet or in cinema. So it was necessary to get some soaps for watching which took some time and required a research. After watching some local soaps s.he decided to go with “Desperate Housewives”. First day of period was normal to cold temperature / weather and it was warm in other five. It was possible to have blanket and night garments. s.he jumped into bed approximately knowing what upcoming confrontation might bring. s.he is used to sleep little and run around all day. From time to time s.he completely brakes down and must sleep all day(s). This now was cut from usual running and also it meant doing something completely different. it was confrontation of girlish part and other parts of h.er. It was very hard and it was to last whole day. Soon, s.he couldn’t just relax and merge into TV soap. TV soap was able to touch or awake many girlish moments in h.erself.
Those moments and lifestyle from the soap although somewhat close and very understandable and in next
step recognized as normal (required?) sissy environment, state of mind, it was very far from what s.he had(?) to live or was able to achieve on daily basis. It become continuation of mental process s.he was in before receiving a note from Aunt Flo.
Soap along with staying in bed in silky night garments was constant reminder of “how it should be” and it
was confronted with h.er attachment to lifestyle s.he have on daily basis. It lead to deep and intense self questioning that marked next few weeks, not just days of menstrual period and brought some openings and acceptance – conclusions about h.erself and living as a sissy. Being a sissy that needs Superior Female as strict Mistress, outside of h.er, here is nothing s.he can became part of. So now h.er inner peace in living that reality has grown as consequence of whole that effort.
Since s.he had all time for h.erself it was possible to drink more slowly but consistently which made
bloating somewhat more bearable. Visiting the restroom and changing tampons was possible to do with much more concentration and order. That was nice. Also s.he was able to concentrate more on making nipples more irritated.
Second day was colored by mental struggles from the previous day with usual bloating and cramps problems trough utilizing everything demanded by the assignment. During the night before the dawn of third day it was obvious that s.he lost some crucial documents and it was one day before s.he had to close a deal with bank which without those documents wouldn’t be possible and consequences of it would be devastating. It became relentless quest to get those documents. s.he didn’t eat as planned for two days and that day at one point, s.he eat cake until s.he felt sick. It was homemade apple pie. Somehow s.he managed to drink required water trough out the day and those thoughts from the first day were heavily present and there whole time. if s.he finds the time s.he will write report on servitude from that day. It was intense day.
On forth day s.he managed to close the deal with the bank which brought relief that united with calmness
from known sensations and tasks in menstrual period. Tight bra and crowded panties are so much tougher
to deal with in hot summer. Although after first day nothing was as it was before last two days were
“normal” menstrual period days. W/we might see what future holds but it is certainly good to be a part
of the House of Sissify.