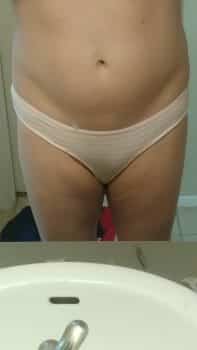 This sissy would like to report an assignment that is crucial for he.r development to The House that s.he shaved he.r body clean of that nasty hair to make sissy and remind he.r sissy is not a Man, but a sissy.

To start off with, may sissy say s.he has done this assignment before and has reported on this in the past. But s.he lost he.r way sometime back and is trying to regain the trust of Madame Stewart and The House, so what better way than to get back to basics and shave he.rself smooth.

To begin with sissy did soak he.r legs and torso in pretty warm water to get he.r skin nice and soft for ten minutes (s.he timed this). Then lathered he.r legs to start with, which for some reason s.he could tell this was a natural thing for he.r to do.

Sissy began with he.r legs, working from bottom to top of he.r neck. As a child, s.he remembered watching he.r Mother shave Her legs, and s.he recalled it all very vividly while s.he started at he.r feet with the razor working upward to he.r knee. Shaving started one leg at a time working the razor upward to the knee and carefully shaving downward on he.r thigh. With each stroke of the razor, s.he could feel he.r shaving the masculinity off he.r body to what s.he was always meant to be. This, for some reason, became very erotic to this sissy, although s.he did not touch he.r clitty as it is not he.r approved day to do so.

Now smooth from the waist down, sissy shaved he.r chest, arms, and armpits. Working the tool up and down anywhere s.he could feel the slightest bit of stubble. After this was complete s.he washed he.r body clean and immediately started cleaning he.r bathtub (which was caked in shaved hair). Once the tub was cleaned s.he dried he.rself off and put lotion on he.r entire body that has a girly smell to it.

Since sissy is now all smooth s.he plans on staying this way forever because that is what a sissy should do. Many thanks to Madame Stewart and The House for allowing he.r to try and earn he.r way back to where s.he belongs, as property of The House.

sissy kylie hopes s.he completed this report to the satisfaction of The House. Here is some photographic evidence for proof, as the first two where the “before” pics and the last four are the “after”. sissy looks forward to he.r progress of becoming the sissy s.he knows s.he is.

Such a beautiful smooth shaved and tucked look that any sissy should be ready to emulate. this sissy tries, but is not quite as skilled at either.

I’m proud of you kylie. You have your transgressions, but you’re trying your best – and there’s nothing more that is meaningful to Me is a sissy who tries her best!